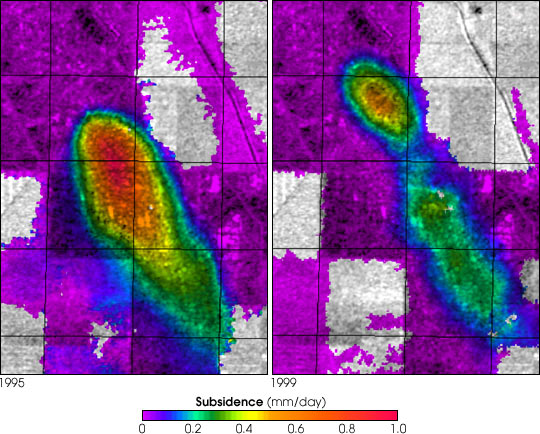 This figure shows a comparison of interferograms from four different years mapping the rapid ground subsidence over the Lost Hills oil field in California. Lost Hills is located about 60 km (40 miles) northwest of Bakersfield in the San Joaquin Valley. The oilfield is about 1.5 km (1 mile) wide and 6 km (3.5 miles) long.

Each interferogram was created using pairs of images taken by synthetic aperture radar that have been combined to measure surface deformation or changes that may have occurred in the time between when data for the two images were taken. The images were collected by the European Space Agency’s Remote Sensing satellites (ERS-1 and ERS-2) in two months of each year shown (1995, 1996, 1998 and 1999) and were combined to produce these image maps of the apparent surface deformation, or changes.

The interferometric measurements that show the changes, primarily vertical subsidence of the surface, are rendered in color with purple indicating no motion and the brightest red showing rapid subsidence. The white areas are where the radar measurements could not be obtained, mostly in the agricultural fields around the oilfields where plant growth or plowing altered the radar properties of the surface.

Subsidence maps like these combined with records of oil and water extraction and injection will help scientist understand how the rocks within an oilfield are behaving, leading to improvements in oilfield operations.

This image shows the surface of the Gulf of Mexico, northeast of the Yucatan Peninsula. Acquired by an imaging radar, the scene shows several features that would be difficult to observe with visible light. In the center of the image are a series of widely-spaced internal waves. The subsurface, internal waves are detectable by radar imagers because they modify the patterns of shorter wavelength waves on the sea surface. The brightness of the radar image depends on the roughness of the surface (smooth surfaces reflect radar waves away from the sensor, while rough surfaces reflect them back towards the sensor).

Crude oil from the wrecked 146,000-ton tanker, Hebei Spirit, is seen polluting the sea off South Korea in this Envisat image. In this image, the dark oil covers the coastal waters of the Yellow Sea southwest of Seoul, South Korea. More than 10,000 tons of oil from the tanker were reported to have leaked into the sea after the ship collided with another vessel on Friday, December 7, 2007.