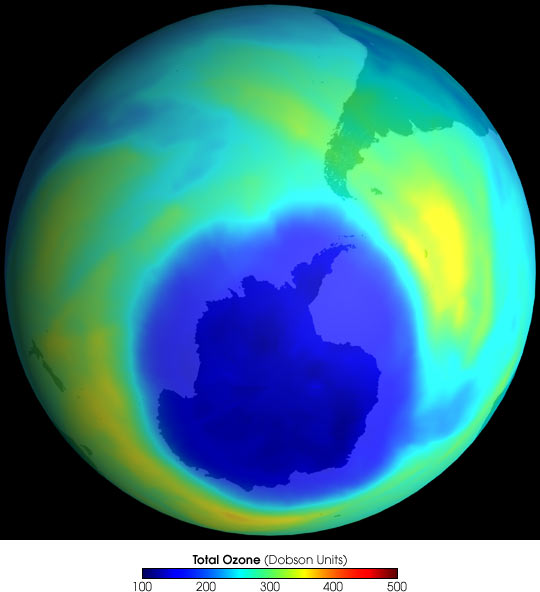 Satellite data show the area of this year’s Antarctic ozone hole peaked at about 26 million square kilometers—roughly the size of North America—making the hole similar in size to those of the past three years, according to scientists from NASA and the National Oceanic and Atmospheric Administration (NOAA). Researchers have observed a leveling-off of the hole size and predict a slow recovery.

Over the past several years the annual ozone hole over Antarctica has remained about the same in both its size and in the thickness of the ozone layer. "This is consistent with human-produced chlorine compounds that destroy ozone reaching their peak concentrations in the atmosphere, leveling off, and now beginning a very slow decline," said Samuel Oltmans of NOAA’s Climate Monitoring and Diagnostics Laboratory, Boulder, Colo.

In the near future—barring unusual events such as explosive volcanic eruptions—the severity of the ozone hole will likely remain similar to what has been seen in recent years, with year-to-year differences associated with meteorological variability. Over the longer term (30-50 years) the severity of the ozone hole in Antarctica is expected to decrease as chlorine levels in the atmosphere decline.

For more information read: 2001 Ozone Hole About the Same Size as Past Three Years.