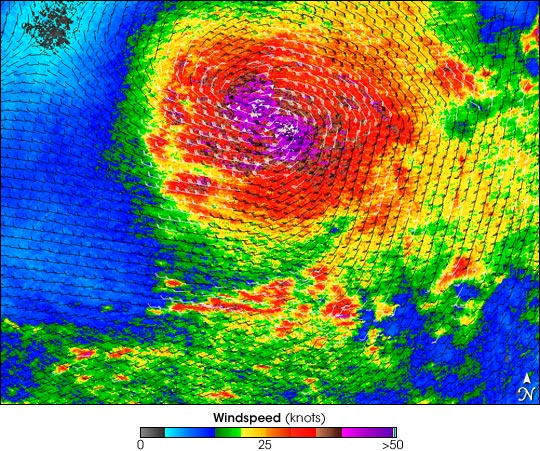 This data visualization shows Tropical Cyclone Gonu and its spiral pattern of winds as recorded by NASA’s QuikSCAT satellite on June 4, 2007. Varying wind speeds within the storm form a bull’s-eye of color, with the highest wind speeds shown in purple in the center of the storm and gradually decreasing speeds radiating outward. Wind direction is depicted with small barbs. White barbs point to areas of heavy rain.

You might expect to see such a well-developed storm hovering over the warm waters of the Caribbean or in the South Pacific, but Tropical Cyclone Gonu showed up in an unusual place. On June 4, 2007, when it was observed by the QuikSCAT satellite, Cyclone Gonu was approaching the northeastern shore of Oman, a region better known for hot desert conditions.

Though rare, cyclones like Gonu are not unheard of in the northern Indian Ocean basin. Most cyclones that form in the region form over the Bay of Bengal, east of India. Those that take shape over the Arabian Sea, west of the Indian peninsula, tend to be small and fizzle out before coming ashore. Cyclone Gonu is a rare exception. As of June 4, 2007, the powerful storm had reached a dangerous Category 4 status, and it was forecast to graze Oman’s northeastern shore, following the coastline of the Gulf of Oman. According to storm statistics maintained on Unisys Weather, the last storm of this size to form over the Arabian Sea was Cyclone 01A, which tracked northwest along the coast of India between May 21 and May 28, 2001. Unlike Gonu’s forecasted track, Cyclone 01A’s path never brought it ashore.

Ground or aircraft-based measurements of the wind strength of Cyclone Gonu would likely show sustained winds significantly higher than those estimated by QuikSCAT. QuikSCAT uses a scatterometer, a device that sends pulses of microwave energy through the atmosphere to the ocean surface and measures the energy that bounces back from the wind-roughened surface. The energy of the microwave pulses changes depending on wind speed and direction, giving scientists a way to monitor wind around the world. This technique does not work over land, but allows measurements in storms over oceans.

Wind speeds in trropical cyclones, however, are difficult for QuikSCAT to measure. To relate the radar signal the sensor measures to actual wind speed, scientists compare measurements taken from buoys and other ground stations to data the satellite acquired at the same time and place. Because the high wind speeds generated by cyclones are rare, scientists do not have enough corresponding ground information to know how to translate data from the satellite for wind speeds above 50 knots (about 93 km/hr, or 58 mph). Also, the unusually heavy rain found in a cyclone distorts the microwave pulses in a number of ways, making a conversion to accurate wind speed difficult. Instead, the scatterometer provides a nice picture of the relative wind speeds within the storm and shows wind direction.