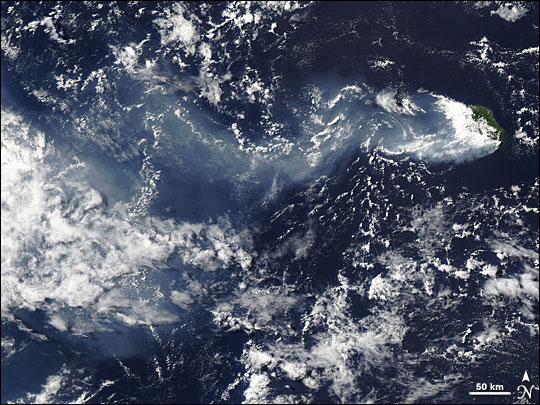 Piton de la Fournaise Volcano on Reunion Island east of Madagascar ranks among the world’s most active volcanoes. In the spring of 2007, it lived up to its reputation by rumbling to life. According to the New Scientist blog, the volcano erupted for the second time in 2007 on March 31. Activity tapered off within several hours, but the volcano erupted again two days later.

The Moderate Resolution Imaging Spectroradiometer (MODIS) on NASA’s Aqua satellite captured this image of the volcano on April 5. This image shows the volcano releasing a plume of ash and/or steam that blows westward over the ocean, spreading out and mingling with clouds as it goes.

Piton de la Fournaise is a shield volcano. Formed from hardened lava, shield volcanoes have a flat shape resembling a soldier’s shield. The volcano has erupted more than 150 times since the 17th century, most of those eruptions producing lava flows.

You can download a 250-meter-resolution Reunion Island KMZ file for use with Google Earth.