Fires in Democratic Republic of Congo 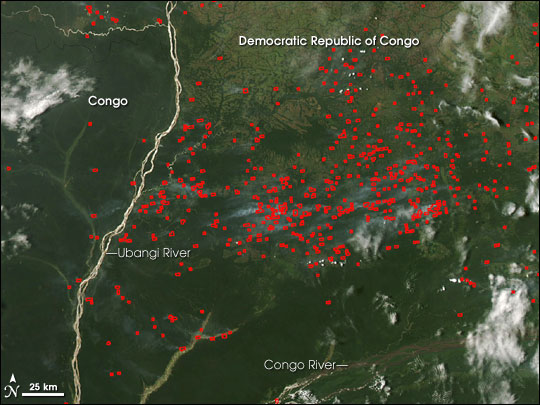 In northwestern Democratic Republic of Congo, in the country’s Equateur province, scores of fires were burning on April 1, 2007, when the Moderate Resolution Imaging Spectroradiometer (MODIS) on NASA’s Aqua satellite passed overhead and captured this image. Places where MODIS detected actively burning fires are marked in red. Fires were concentrated in the area north of the Congo River. This area is north of the equator, and it experiences its dry season roughly from December-February each year. These fires likely indicate agricultural preparations for the upcoming wet (growing) season, which begins in April. Although it is not necessarily immediately hazardous, such large-scale burning can have a strong impact on weather, climate, human health, and natural resources.

The large image provided above has a spatial resolution (level of detail) of 250 meters per pixel. The MODIS Rapid Response Team provides twice-daily images of parts of Africa in additional resolutions and formats.