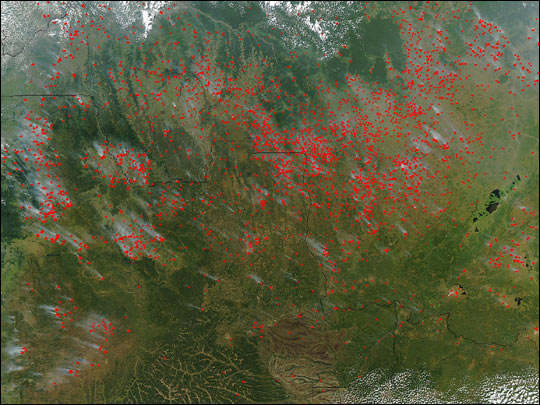 Thousands of smoky fires (red dots) were burning across Democratic Republic of Congo (top right) and Angola (bottom left) on May 10, 2004. This image and the fire detections were captured by the Moderate Resolution Imaging Spectroradiometer (MODIS) on NASA’s Aqua satellite during its afternoon overpass of central Africa.

The widespread nature of the fires, their location (generally located away from remaining natural vegetation, which appears deeper green), and the time of year suggest that these fires are being set intentionally for agricultural purposes. Though not necessarily immediately hazardous, such large-scale burning can have a strong impact on weather, climate, human health, and natural resources.