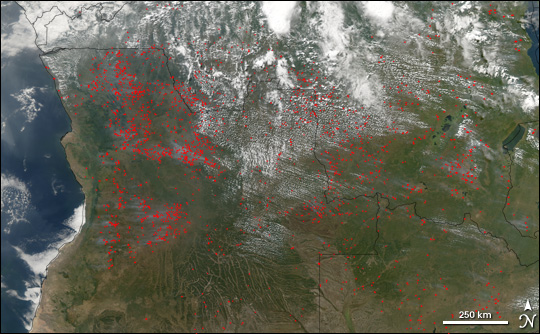 Hundreds of fires were burning in Angola (left) and Democratic Republic of Congo (upper right) on May 30, 2006, when the Moderate Resolution Imaging Spectroradiometer (MODIS) on NASA’s Aqua satellite captured this image. MODIS also detected fires (locations marked in red) in Zambia (bottom right).

Widespread agricultural burning (clearing old vegetation or brush from pasture and croplands) occurs in the dry season in this part of Africa. The start and stop date of the dry and rainy seasons varies; in northern Angola, for example, the dry season usually begins in May and lasts until September or October.

Fires are a well-established, and in many cases natural, part of the savanna landscapes of Africa south of the Sahara. Although it is not necessarily immediately hazardous, such large-scale burning can have a strong impact on weather, climate, human health, and natural resources.