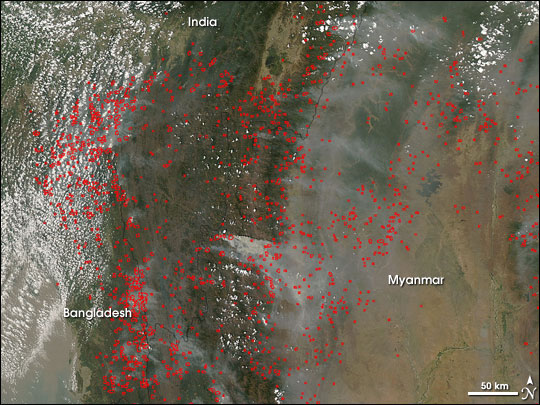 Scores, possibly hundreds, of fires were detected by the Moderate Resolution Imaging Spectroradiometer (MODIS) on NASA’s Aqua satellite when it passed over Southeast Asia on April 4, 2007. Places where the sensor detected actively burning fires are marked with red dots. The dry season is drawing to a close across much of Southeast Asia, and agricultural burning is widespread. Intentional fires also get out of control and burn into nearby forests. Thick smoke often becomes a problem in the spring months in the region, creating health problems and interfering with transportation.

This image is centered on Myanmar, but biomass burning is widespread across most of Southeast Asia in the Northern Hemisphere spring. Though it is not necessarily immediately hazardous, such large-scale burning can have a strong impact on weather, climate, human health, and natural resources.

Hundreds of fires were burning in Myanmar and surrounding countries in March and April 2007.

Thousands of fires burning in Southeast Asia were blanketing the region with blue-gray smoke at the time this image was captured by the MODIS instrument on NASA’s Aqua satellite on March 27, 2004. MODIS has been capturing images of the region’s agricultural burning season since early February, but activity seems to have picked up considerably in mid to late March.