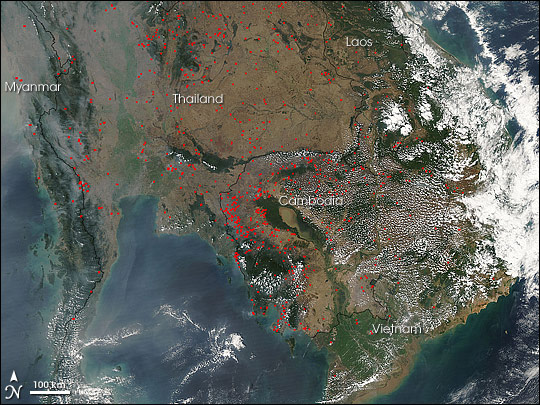 Fires across several Southeast Asian countries were creating hazy skies over the area on February 4, 2007. This image from the Moderate Resolution Imaging Spectroradiometer (MODIS) on NASA’s Aqua satellite shows places where the sensor detected actively burning fires marked with red dots. The smoke seems thicker to the west, over Myanmar and Thailand, and that may be because the smoke from the fires is combined with industrial and urban pollution from locations farther west.

The early part of the year is when the dry phase of the monsoon is underway, and during this time intentional and accidental fires are common across the region. Fire is a land management tool used for clearing forests for fields, for burning off crop residue, and for clearing old pasture in preparation for new spring growth. Although these fires are not necessarily immediately hazardous, such large-scale burning can have a strong impact on weather, climate, human health, and natural resources.