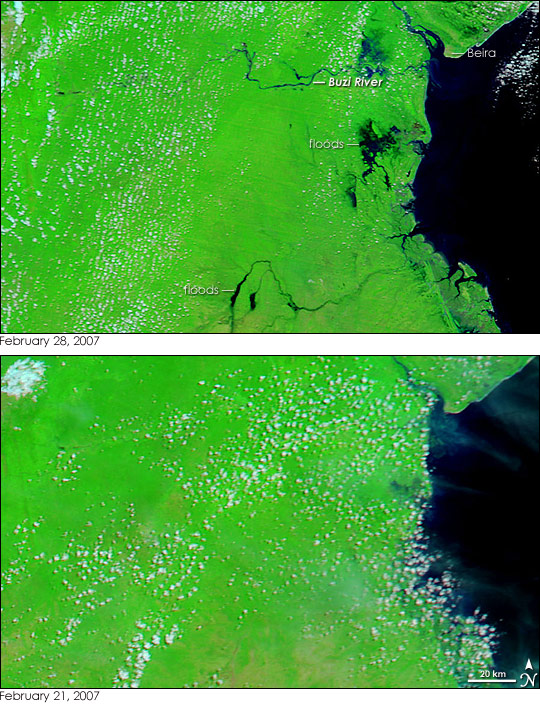 Cyclone Favio slammed into Central Mozambique on February 22, 2007, pounding the country with winds over 200 kilometers per hour and drenching rains. After coming ashore in southern Mozambique, the storm tracked northwest over the country. It quickly lost power as it moved inland, but its rains taxed river systems in Central Mozambique. On February 28, 2007, the Moderate Resolution Imaging Spectroradiometer (MODIS) on NASA’s Terra satellite captured its first view of the cyclone-induced floods. The Buzi River and smaller rivers and wetlands to its south are swollen in this image. The image was made with infrared and visible light to enhance the contrast between water and land. In this type of image, water is black, plant-covered land is green, and non-vegetated land is tan. The city of Beira, north of the flood area, is a small tan dot. The lower image shows conditions the day before the storm came ashore. (The cyclone can be seen approaching the shore in the large image.) Though the image is slightly cloudy, it is clear that the region was still dry in the hours leading up to Favio’s landfall.

Cyclone Favio came on the heels of severe flooding along the Zambezi River, immediately north of the region shown here. The Zambezi floods displaced as many as 140,000 people, while Favio affected an additional 40,000 people, said ReliefWeb.Daily images of the flood region are available from the MODIS Rapid Response System.

Tropical Cyclone Favio came ashore on the coast of Mozambique in the morning of February 22, 2007. At the time it crossed the shoreline, Favio had lost some strength from its peak the previous day, but still had extremely powerful winds, which measured around 203 kilometers per hour (126 miles per hour).