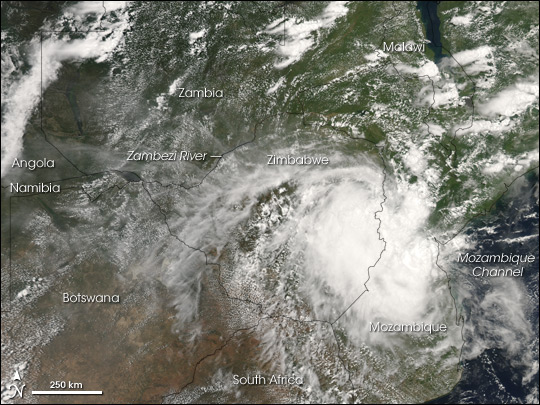 Tropical Cyclone Favio came ashore on the coast of Mozambique on the morning of February 22, 2007. At the time it crossed the shoreline, Favio had lost some strength from its peak the previous day, but still had extremely powerful winds. The cyclone continued to weaken as it passed over land, becoming a tropical depression. As of 8:00 a.m. local time (0600 UTC), winds were down to 60 kilometers per hour (38 miles per hour), according to the South African Weather Service.

This photo-like image was acquired by the Moderate Resolution Imaging Spectroradiometer (MODIS) on the Aqua satellite on February 23, 2007, at 1:45 p.m. local time (11:45 UTC), as the tropical depression was crossing into Zimbabwe. The storm still has a distinct balled-up form left over from its cyclone state the previous day, but once over land, the strong circular eye and powerful eyewall storms typical of a cylone were gone.

As it traveled farther inland towards the Zambezi River valley, the storm brought heavy rains to Zimbabwe. This region had already suffered from heavy rains associated with the onset of the monsoon, and severe flooding along the Zambezi River in mid-February killed dozens of people and forced more than a hundred thousand people to evacuate, according to reports from the International Federation of Red Cross and Red Crescent Societies posted online by ReliefWeb. There had been widespread additional evacuations ahead of Cyclone Favio’s arrival.

You can download a 250-meter-resolution Cyclone Favio KMZ file for use with Google Earth.

Tropical Cyclone Favio came ashore on the coast of Mozambique in the morning of February 22, 2007. At the time it crossed the shoreline, Favio had lost some strength from its peak the previous day, but still had extremely powerful winds, which measured around 203 kilometers per hour (126 miles per hour).