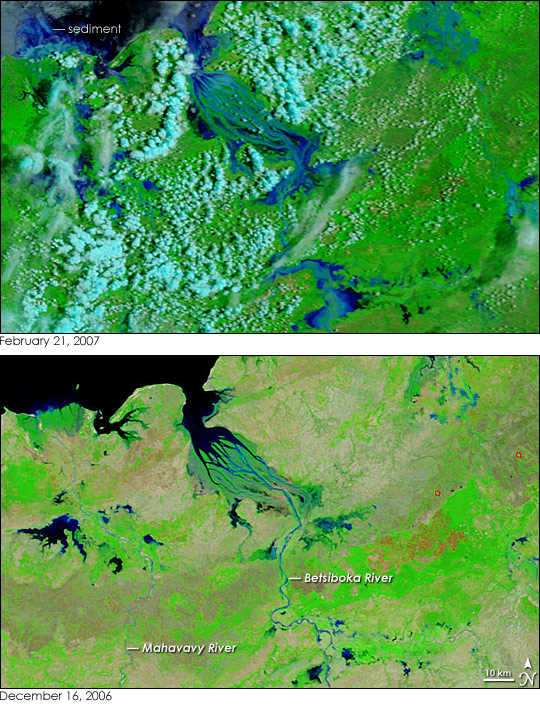 A string of tropical cyclones, including Cyclones Favio, Clovis, and Bondo, struck Madagascar from December to February 2007, dumping heavy rain on the island nation. The resulting floods left almost 25,000 people in need of assistance and destroyed an estimated 200,000 tons of rice, reported Reuters on February 19. The Moderate Resolution Imaging Spectroradiometer (MODIS) on NASA’s Terra satellite captured the top image of flooding in western Madagascar on February 21, 2007. Full of the region’s characteristic red mud, the Betsiboka River and surrounding rivers are bright blue instead of black or dark blue, as water usually is in this type of image. The lower image, acquired on December 16, 2006, shows the rivers before the cyclones struck. These rivers are prone to flooding during the rainy season, and the cyclones and seasonal rains pushed them well over their dry-season extent. By February 21, the Betsiboka was a wide blue ribbon surrounded by pools of water.

These images were made with infrared and visible light so that water is black and blue. Clouds are blue and white, and plant-covered land is green. Bare ground is tan, freshly burned land is dark orange, and active fires are outlined in red. The rains not only brought floods, but turned the landscape from tan to green as plants flourished. To see a photo-like version of the images, please visit the MODIS Rapid Response web site.