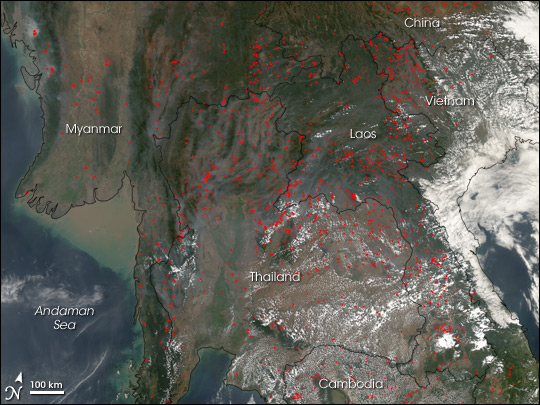 In Southeast Asia, both accidental and intentional fires are common in the annual dry season, which occurs during Northern Hemisphere winter months. People set fires to clear cropland before the spring rains arrive, and also to stimulate new pasture. People also use fire to clear the region’s tropical forests for new agricultural land.

This image from Moderate Resolution Imaging Spectroradiometer (MODIS) on NASA’s Aqua satellite shows scores of fires burning across parts of Myanmar, Thailand, Cambodia, Laos, Vietnam, and southern China on February 21, 2007. Places where MODIS detected active fires are marked in red. A few fires appear to be large and smoky, which might indicate that forest or moisture-rich vegetation is burning. Though it is not necessarily immediately hazardous, such large-scale burning can have a strong impact on weather, climate, human health, and natural resources.