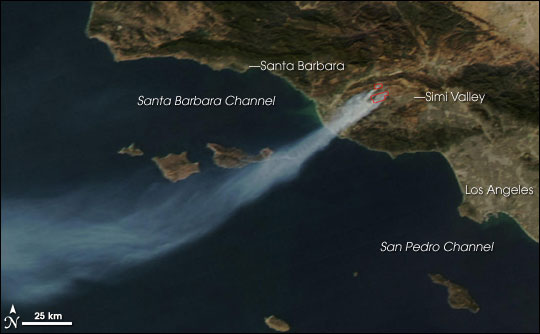 A long plume of smoke from a wildfire in southern California crossed the Channel Islands and spread out over the Pacific Ocean on December 3, 2006. This image of the Shekell Fire was captured by the Moderate Resolution Imaging Spectroradiometer (MODIS) on NASA’s Aqua satellite at 12:25 p.m. local (Pacific) time. Places where MODIS detected actively burning fire are outlined in red.

According to news reports, the fire was burning near the town of Moorpark, which is about 10 kilometers (about 6.2 miles) west of Simi Valley. The fire, which began early Sunday morning, had destroyed several homes, and burned about 9,700 acres as of Monday morning, December 4.

The high-resolution image provided above has a spatial resolution of 250 meters per pixel. The MODIS Rapid Response System provides twice-daily images of the area at additional resolutions.