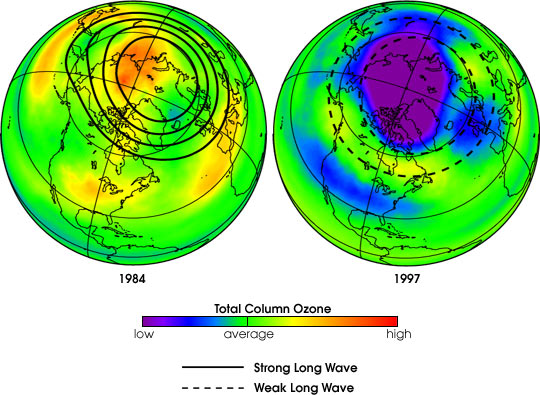 NASA researchers using 22 years of satellite-derived data have confirmed a theory that the strength of “long waves,” bands of atmospheric energy that circle the Earth, regulate the temperatures in the upper atmosphere of the Arctic, and play a role in controlling ozone losses in the stratosphere. These findings will also help scientists predict stratospheric ozone loss in the future.

Just as the weather at the Earth’s surface varies a lot from one year to the next, so can the weather in the stratosphere. For instance, there were some years, like 1984, in which it didn’t get cold enough in the Arctic stratosphere for significant ozone loss to occur. “During that year, we saw stronger and more frequent waves around the world that acted as the fuel to a heat engine in the Arctic, and kept the polar stratosphere from becoming cold enough for great ozone losses,” said Paul Newman, lead author of the study and an atmospheric scientist at NASA’s Goddard Space Flight Center, in Greenbelt, Md.

“Other years, like 1997, weaker and less frequent waves reduced the effectiveness of the Arctic heat engine and cooled the stratosphere, making conditions just right for ozone destruction,” Newman said. His team’s research appears in the September 16 issue of Journal of Geophysical Research-Atmospheres.

A long wave or planetary wave is like a band of energy, thousands of miles in length that flows eastward in the middle latitudes of the upper atmosphere, and circles the world. It resembles a series of ocean waves with ridges (the high points) and troughs (the low points). Typically, at any given time, there are between one and three of these waves looping around the Earth.

Weaker long waves over the course of the Northern Hemisphere’s winter generate colder Arctic upper air temperatures during spring. By knowing the cause of colder temperatures, scientists can better predict what will happen to the ozone layer.

The images above show the relationship between atmospheric long waves in February of 1984 (left) and 1997 (right), and ozone. Color represents total ozone anomaly for the month of March—the difference between the measured ozone and the March ozone levels averaged over many years. In 1984, strong long waves warmed the Arctic stratosphere, reducing the amount of ozone loss. In 1997, however, weak long waves were not powerful enough to mix warm tropospheric air into the stratosphere, resulting in greater than normal ozone loss.