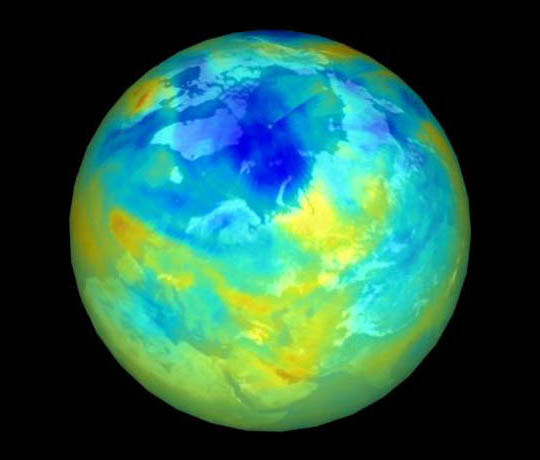 Ozone levels in the stratosphere over the North Pole were very low this winter. In this image using data from NASA's TOMS Earth Probe, blue regions represent the difference between ozone levels observed in the early 1980's and this winter.

A combination of factors contributed to the dramatic drop in Arctic stratospheric ozone levels this year. Despite the very dry conditions in the polar stratosphere, temperatures plunged far enough to enable polar stratospheric clouds (PSCs) to form at an unusually early date. PSCs are necessary for the conversion of chlorine from benign molecular forms into chlorine monoxide, an ozone-destroying compound.

Research into polar ozone can prove valuable for people living at northern high-latitudes. As winter wanes and air temperatures rise, the polar vortex begins to break up. The ozone-depleted atmosphere contained by the vortex throughout the winter now begins to move into lower latitudes, thus lowering average ozone levels in these areas.