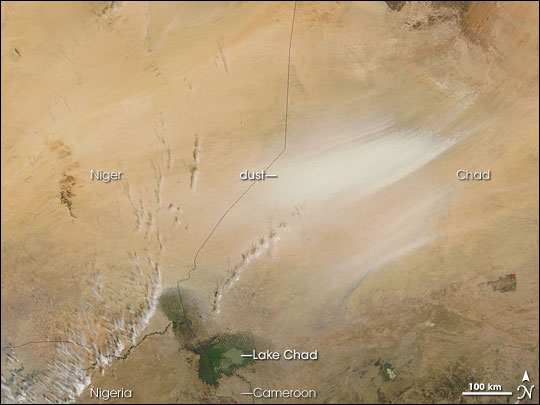 Chad’s lowest point is the Bodele Depression, and it is one of the world’s most active sources of dust storms. The Moderate Resolution Imaging Spectroradiometer (MODIS) on NASA’s Terra satellite took this picture of a dust storm in the Bodele Depression on November 9, 2006. In this image, the dust plumes appear as pale beige brush strokes against a tan background. Of the two plumes visible in this picture, the plume to the north is wider and thicker.

To the southwest of the dust storm is Lake Chad. Once approaching the size of Lake Erie in North America, Lake Chad is now estimated at approximately 5 percent of its size in 1966. Irrigation and declines in rainfall have both diminished the lake. In this picture, the shallow lake appears mostly dark green.