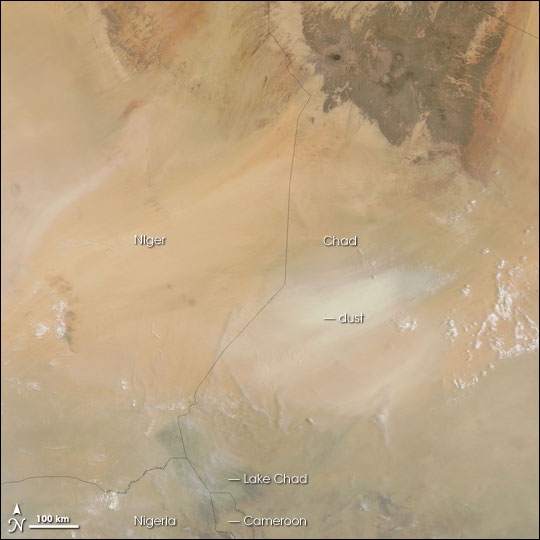 A dust storm blew through part of eastern Chad on June 11, 2006. The Moderate Resolution Imaging Spectroradiometer (MODIS) flying onboard NASA’s Terra satellite captured this image of the storm as it blew toward Lake Chad. In this image, the dust appears as a wisp of pale beige set against a darker tan background. Lake Chad, near the border with Nigeria and Cameroon, is barely visible in this image, although it has been easily discernible in other satellite images.

Although large, Lake Chad is shallow, and it is not the lowest point in Chad. Sitting at an even lower elevation is the Bodele Depression in eastern central Chad. The Bodele Depression, part of a former lake bed or inland sea, is one of the world’s most active sources of windblown dust, and it was likely the source of this storm. A study published in 2004 demonstrated that dust storms move more rapidly across the depression than previously assumed.