Mixing Waters and Moving Ships off the North Carolina Coast 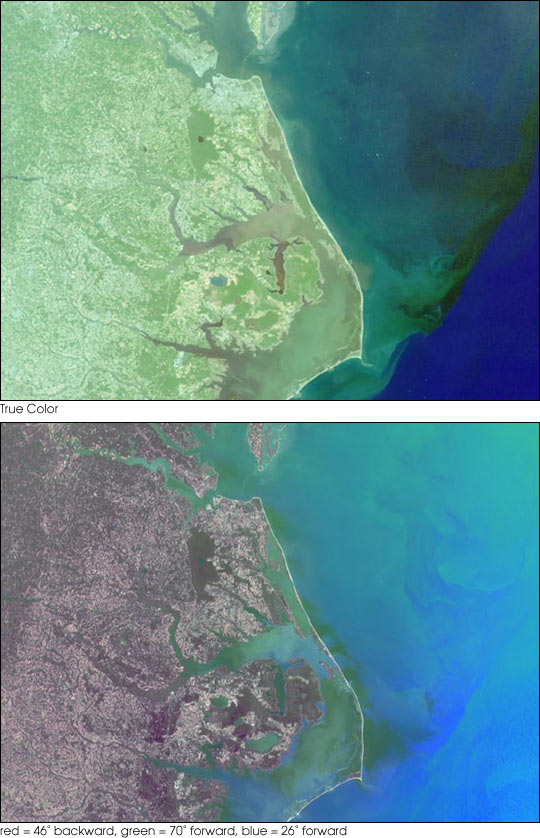 The estuarine and marine environments of the United States’ eastern seaboard provide the setting for a variety of natural and human activities associated with the flow of water. This set of Multi-angle Imaging SpectroRadiometer images from October 11, 2000 captures the intricate system of barrier islands, wetlands, and estuaries comprising the coastal environments of North Carolina and southern Virginia. On the right-hand side of the images, a thin line of land provides a tenuous separation between the Albemarle and Pamlico Sounds and the Atlantic Ocean. The wetland communities of this area are vital to productive fisheries and water quality.

The top image covers an area of about 350 kilometers x 260 kilometers and is a true-color view from MISR’s 46-degree backward-looking camera. Looking away from the Sun suppresses glint from the reflective water surface and enables mapping the color of suspended sediments and plant life near the coast. Out in the open sea, the dark blue waters indicate the Gulf Stream. As it flows toward the northeast, this ocean current presses close to Cape Hatteras (the pointed cape in the lower portion of the images), and brings warm, nutrient-poor waters northward from equatorial latitudes. North Carolina’s Outer Banks are often subjected to powerful currents and storms which cause erosion along the east-facing shorelines. In an effort to save the historic Cape Hatteras lighthouse from the encroaching sea, it was jacked out of the ground and moved about 350 meters in 1999.

The bottom image was created with red band data from the 46-degree backward, 70-degree forward, and 26-degree forward cameras displayed as red, green, and blue, respectively. The color variations in this multi-angle composite indicate different angular (rather than spectral) signatures. Here, the increased reflection of land vegetation at the angle viewing away from the Sun causes a reddish tint. Water, on the other hand, appears predominantly in shades of blue and green due to the bright sunglint captured by the forward-viewing cameras. Contrasting angular signatures, most likely associated with variations in the orientation and slope of wind-driven surface waves, are apparent in the sunglint patterns.

Details of human activities are visible in these images. Near the top center, the Chesapeake Bay Bridge-Tunnel complex, which links Norfolk with Virginia’s eastern shore, can be seen. The locations of two tunnels which route automobiles below the water appear as gaps in the visible roadway. In the top image, the small white specks in the open waters of the Atlantic Ocean are ship wakes. The movements of the ships have been visualized by displaying the views from MISR’s four backward-viewing cameras in an animated sequence. These cameras successively observe the same surface locations over a time interval of about 160 seconds. The large version of the animation covers an area of 135 kilometers x 130 kilometers. The land area on the left-hand side includes the birthplace of aviation, Kitty Hawk, where the Wright Brothers made their first sustained, powered flight in 1903.

Cold Waters Along the Atlantic Coast