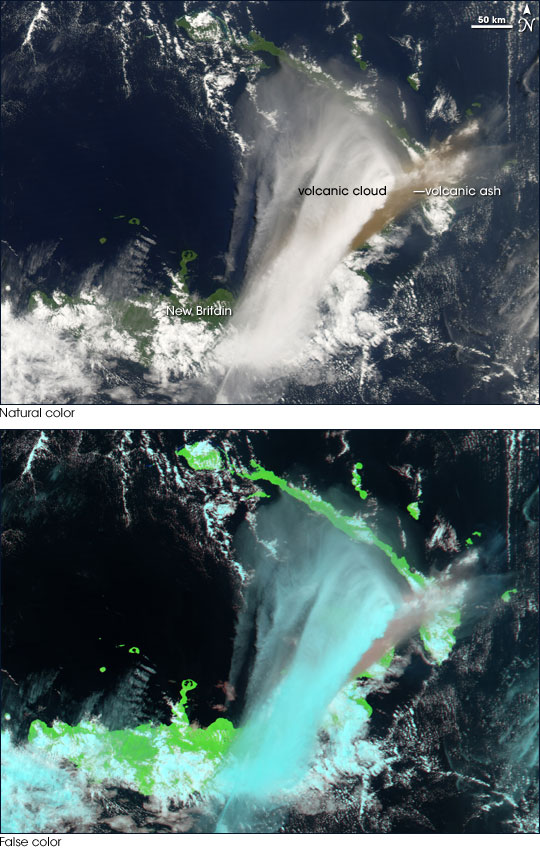 On October 7, 2006, Rabaul Volcano on the northeastern tip of New Britain produced a large-scale eruption. According to ReliefWeb, the eruption shook windows and rained heavy ash and small stones on the city of Rabaul as authorities declared a state of emergency. The Moderate Resolution Imaging Spectroradiometer (MODIS) on NASA’s Aqua satellite captured these images the same day. The top image is a “natural-color” image, showing the area as it would look to human eyes. The bottom image uses a combination of infrared light and visible light.

In both images, the eruption’s extent is clear, as volcanic emissions block the view of most of the island. The brown or tan plume in the east is volcanic ash. The bright “cloud” to the immediate left of the brown ash resembles a regular cloud but likely results from the volcano itself. If a volcanic ash plume reaches a high enough altitude, the water content of that plume turns to ice crystals, and these ice crystals “white out” the ash content that would otherwise appear tan or brown. According to Simon Carn of the Joint Center for Earth Systems Technology, Rabaul produced a similar ice-rich cloud in a major eruption in 1994.

Rabaul is a shield volcano formed from deposits left by earlier eruptions. It has produced major explosions during historical times, including large eruptions in 1878 and 1994. The 1994 eruption produced simultaneous activity from the Vulcan and Tavurvur Volcanoes.

Rabaul Volcano, on the northeastern tip of New Britain Island, underwent a large eruption on October 7, 2006, releasing volcanic ash and steam. A day later, the volcanic plume had dissipated.

Rabaul Volcano released a plume of ash and steam on the morning of September 30, 2009.

Acquired August 9, 2009, this image shows a mostly white plume from Rabaul Volcano blowing northwest toward the island of New Ireland.