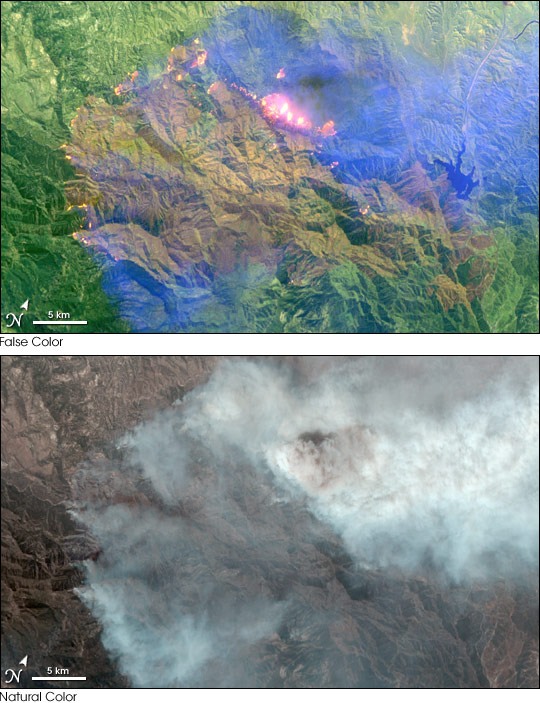 While the outline of a fire may be hidden by thick smoke in a photo-like, “natural-color” image, “false-color” images that use visible as well as short-wave or near-infrared light observed by remote-sensing instruments can reveal details on the ground. This pair of images shows the Day Fire in southern California northwest of Los Angeles on September 19, 2006. The images are based on data collected by an aircraft-based sensor called MASTER, a simulator for two sensors on NASA’s Terra satellite. (NASA uses airborne simulators to cross-check the accuracy of satellite data.)

In the natural-color version (bottom), dingy white smoke hangs over most of the scene, hiding the outline of the fire. But in the infrared-enhanced version (top), the actively burning areas around the perimeter of the blaze are obvious as glowing pink and yellow spots, while the smoke fades into a transparent blue. Unburned vegetation appears green, while the burned area appears in shades of brown and gold.

The MASTER instrument simulates the Moderate Resolution Imaging Spectroradiometer (MODIS) and the Advanced Spaceborne Thermal Emission and Reflection Radiometer (ASTER) sensors on Terra. The instrument can be mounted on several different aircraft, including NASA’s ER-2 and WB-57 airplanes.