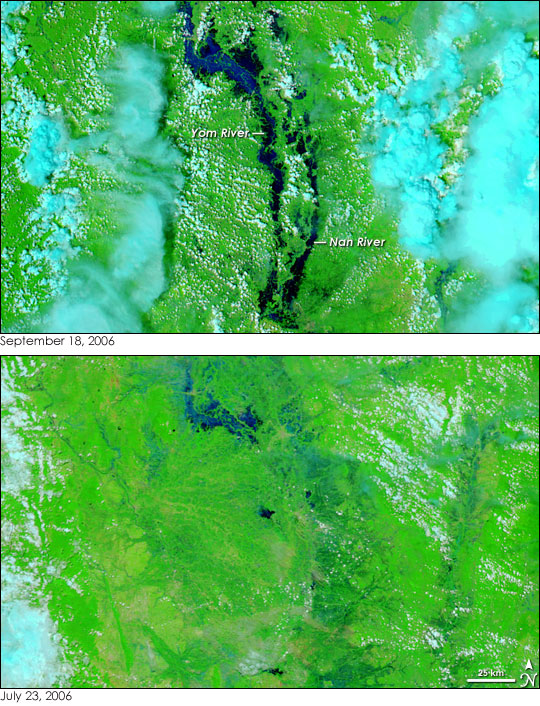 Swollen by heavy monsoon rains, the Yom and the Nan Rivers paint wide black stripes across the bright green vegetation of northern Thailand in the top Moderate Resolution Imaging Spectroradiometer (MODIS) image. The image was collected on September 18, 2006, by the MODIS sensor flying on NASA’s Aqua satellite, and was made using light from the infrared portion of the electromagnetic spectrum. Called false color because it does not reproduce Earth’s features as a human eye sees them (like a digital photograph), this type of image makes the distinction between water and land clear. Water is dark blue or black, while plant-covered land is bright green. Bare or sparsely vegetated land is tan, and clouds are pale blue and white.

In the top image, a break in the clouds reveals floods along the Yom and Nan Rivers. The lower image, taken on July 23, 2006, before the heavy rains began in August, provides a reference for the dry-season extents of the rivers. While water dots the land in the lower image, particularly in the wetland near the top edge of the image, the rivers are not clearly visible. In the top image, not only are the rivers distinct, but the wetland has also expanded with the influx of monsoon rain. According to the Dartmouth Flood Observatory, floods throughout northern Thailand submerged large tracts of farmland and forced thousands of evacuations in late August and early September.

The large images provided above are at MODIS’ maximum resolution of 250 meters per pixel. Daily images of northern Thailand are available from the MODIS Rapid Response Team in a variety of resolutions.