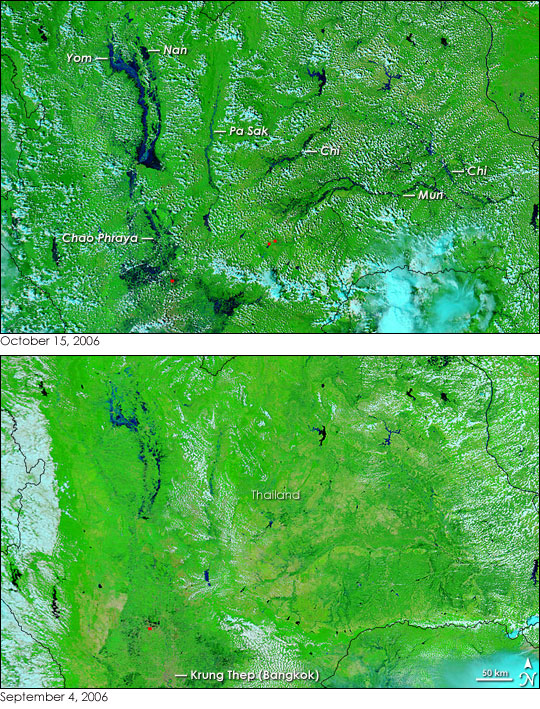 Captured on the morning of October 15, 2006, by the Moderate Resolution Imaging Spectroradiometer (MODIS) on NASA’s Aqua satellite, this bird’s-eye view of Southeast Asia reveals remarkably extensive flooding on rivers throughout northern and central Thailand. The country was inundated with floods from late August to early October after unusually heavy monsoon rains and Typhoon Xangsane pounded the region. By mid-October, nearly every major river was swollen, including the Chao Phraya, which runs through the country’s capital, Krung Thep (Bangkok).

Also along the Chao Phraya, about ninety kilometers north of Krung Thep (near the river’s name in the image), is Ayutthaya. The Siamese capital from 1350 to 1767 and now a UNESCO World Heritage Site, the ancient city had been inundated with floods, reported Agence France Presse. The floods threatened to destroy 25 Buddhist temples, forts, and pagodas, said AFP. To the east, the Mun and Chi Rivers also threatened historical and religious sites, said The Nation, a Bangkok newspaper, which called the floods the worst in a decade.

Elsewhere in the top image, the Yom, Nan, and Pa Sak Rivers are also flooded. The lower image shows Thailand on September 4, 2006, before September and October’s monsoon rains and typhoon. While the Yom and the Nan Rivers were flooded from earlier monsoon rains, the other rivers in the country were at their normal levels. The lightning-shaped black streaks formed by the flooded rivers in the top image were not present.

Both images were made with visible and infrared light to create a greater contrast between the flooded rivers and the plant-covered land. In these images, water is black or dark blue. Vegetated land is green, and lightly vegetated or bare land is tan. Clouds are pale blue and white. Fires have been marked with red dots. The MODIS Rapid Response Team provides daily images of Thailand in both false color, such as the images shown here, and photo-like, natural color.