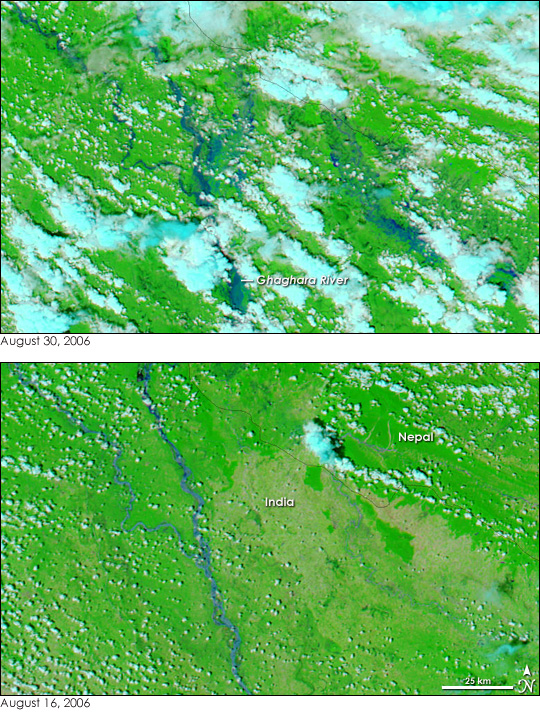 After unusually heavy monsoon rains at the end of August 2006, devastating floods and landslides swept through the western half of the Himalayan country of Nepal. The floods were the worst in 40 years, according to reports collected by the Dartmouth Flood Observatory. By September 3, the International Federation of Red Cross and Red Crescent Societies reported that 45 had died and 973 families had been displaced. When the water flowed south into India’s Uttar Pradesh state, more than 100,000 people were affected by floods, said the Dartmouth Flood Observatory.

Though flooding was not visible in Nepal on August 30 when the Moderate Resolution Imaging Spectroradiometer (MODIS) on NASA’s Aqua satellite acquired the top image, rivers flowing across the border into India were swollen with the run-off. The Ghaghara River and its tributaries are wide blue ribbons against the bright green, plant-covered land. Their banks no longer clearly defined, the flooded rivers have a slightly messy appearance in the top image. Dark blue pools of water stretch web-like around the Ghaghara and its tributaries, indicating wide-spread flooding. The lower image, taken on August 16, shows the rivers before the floods. Tan areas are regions that had little or no vegetation. Clouds are light blue and white.

The large images provided above are at MODIS’ full resolution of 250 meters per pixel. Daily images of northwestern India are available from the MODIS Rapid Response Team in a variety of resolutions.