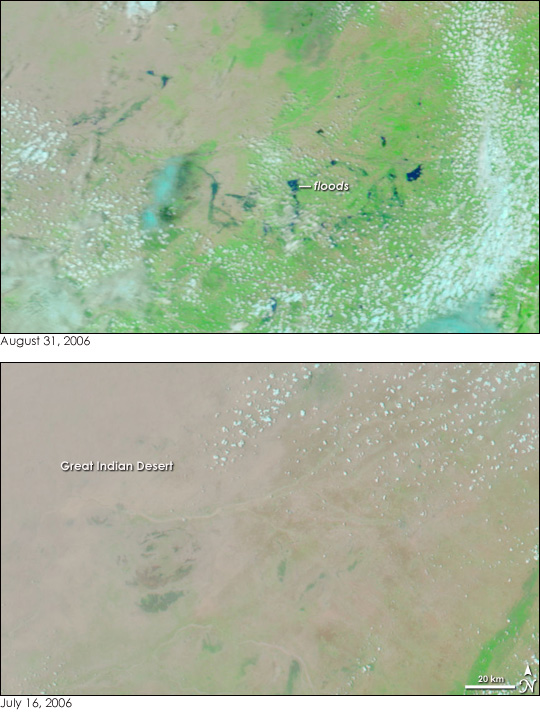 The summer of 2006 brought unusually heavy monsoon rains to India. Most parts of the country grappled with floods at some point between May and August, even the Great Indian Desert in northwestern India. Between August 16 and August 26, 549 millimeters of rain fell in Rajasthan, the state in which the desert lies, surpassing a 200-year-old record, said the Dartmouth Flood Observatory. The resulting flooding was visible on August 31, when the Moderate Resolution Imaging Spectroradiometer (MODIS) on NASA’s Terra satellite captured the top image. Though clouds (light blue and white) partially obscure the scene, pockets of dark blue flood water appear to flow through formerly dry channels. A more wide-spread indicator of the heavy rain is the color of the landscape. In mid-July, lower image, the desert was pink-tan, with very little vegetation growing on it. By the end of August, brushes of green extended across most of the desert, indicating that plants were growing in the unusually moist conditions.

Though the floods may appear small here, they have severely affected more than 58,000 people, reported the International Federation of Red Cross and Red Crescent Societies (IFRC) on August 31. In Rajasthan, 104 were reported dead, and hundreds more remained stranded in the floods, said the IFRC.

The large images provided above are at MODIS’ full resolution of 250 meters per pixel. Daily images of northwestern India are available from the MODIS Rapid Response Team in a variety of resolutions.