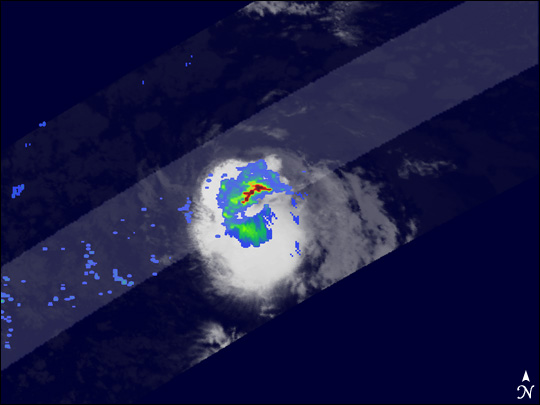 Known as a Cape Verde storm because of its formation in the far eastern Atlantic near the Cape Verde Islands, Debby began as a tropical depression on August 21, 2006, from an African easterly wave that moved off the coast of West Africa.

This image was taken by the Tropical Rainfall Measuring Mission (TRMM) satellite on August 24, 2006, at 02:07 a.m. UTC (August 23 at 10:07 p.m. EDT) as Debby was moving northwest through the central Atlantic. TRMM reveals that Debby was a small, compact storm; however, a band of intense rain (dark red area) is apparent north of the center and indicates an area of active convection (uprising air).

The TRMM satellite was placed into service in November 1997. From its low-earth orbit, TRMM has been providing valuable images and information on storm systems around the tropics using a combination of passive microwave and active radar sensors, including the first precipitation radar in space. TRMM is a joint mission between NASA and the Japanese space agency, JAXA.

As of August 24, 2006, Tropical Storm Debby was making its way through the central Atlantic and poses no immediate threat to any land areas.