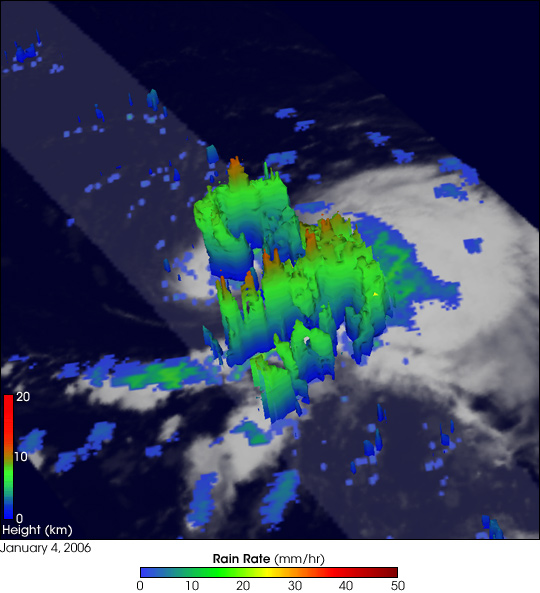 It is perhaps no surprise that the 2005 hurricane season, which shattered so many records, concluded the year with an active storm in the Atlantic—Tropical Storm Zeta. On December 30, 2005, Tropical Storm Zeta, the record 27th named storm of the season, was born in the central Atlantic from a remnant area of low pressure previously associated with an old frontal boundary. These boundaries can induce convection, which in turn can transform an area of associated low pressure from one with midlatitude characteristics into one with tropical charactersitics. This type of tranformation in not uncommon in the later stages of the hurricane season.

Over the next several days, Zeta moved in a general westward direction, initially northwestward then southwestward, across the central Atlantic well away from any land areas. Zeta has remained a tropical storm with only slight fluctuations in intensity.

The image shown above is derived from data collected by the Tropical Rainfall Measuring Mission (TRMM) satellite at 00:34 UTC on January 4 (7:34 p.m. EST, January 3). It shows a three-dimensional (3D) perspective of Zeta, looking west across the storm. The image is made from data from the TRMM Precipitation Radar (PR). The PR can look inside the storm to shows details of the storm’s structure. The 3D part of the image corresponds to the height of small, precipitation-sized particles. The red tops show areas of deeper convection (greater uprising of air) that are associated with the areas of heavier rain. The center of the storm is nearly surrounded by a ring of moderately deep convection (green). A gap separates the center convection from the higher tops associated with the rainband (green ridge with red tops). At the time of these images, Zeta was still a tropical storm with sustained winds of 100 kilometers per hour (63 miles per hour). The system was moving to the southwest. Zeta was expected to turn northwestward and weaken.

For the past eight years, the TRMM satellite has used its array of passive and active sensors to estimate rainfall over the global Tropics from space. TRMM has also proven to be a valuable platform for monitoring and studying tropical cyclones (tropical storms and hurricanes), especially over remote parts of the open ocean, such as in the case with Zeta in the central Atlantic. TRMM is a joint mission between NASA and the Japanese space agency, JAXA.