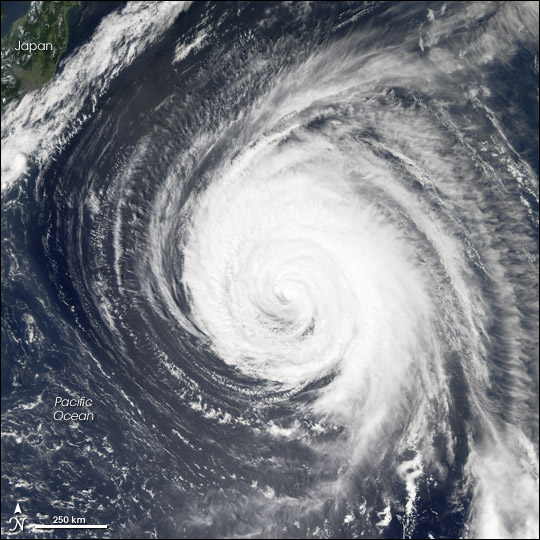 Tropical Storm Ioke looks more like a worn-out typhoon than a tropical storm in satellite imagery obtained on September 4, 2006. Appearances do not deceive in this instance. Ioke rose all the way to hurricane strength in less than 24 hours after forming on August 19. Ioke has since also performed another unusual trick, crossing the International Date Line on August 27, which by convention means the tropical cyclone was then called a typhoon instead of a hurricane. Technically, it became a super typhoon [a term used for typhoons with sustained winds over 240 kilometers per hour (150 miles per hour)] on August 24, but retained the title of hurricane until it crossed into the typhoon region. With warm seas under it, little wind shear to tear it apart, and no significant land in its way, Super Typhoon Ioke managed to traverse most of the world’s largest ocean, only gradually running down as it approached Japan, thousands of kilometers from its formation point.

This photo-like image was acquired by the Moderate Resolution Imaging Spectroradiometer (MODIS) on the Aqua satellite on September 4, 2006, at 1:20 p.m. local time (03:20 UTC). Tropical Storm Ioke at the time of this image had a well-defined round shape, distinct spiral-arm structure, and a cloud-filled (or “closed”) eye. The University of Hawaii’s Tropical Storm Information Center reported that Ioke had sustained winds of around 130 kilometers per hour (80 miles per hour) at the time this satellite image was acquired, enough to still be classified as a typhoon. Within hours, however, central winds continued to weaken, and the former super typhoon was reclassified as a tropical storm. Though it appears to be approaching Japan in this satellite image, the track of the storm was curving away from its long westbound track and was heading north. It was predicted to eventually move east at higher latitudes without affecting Japan.