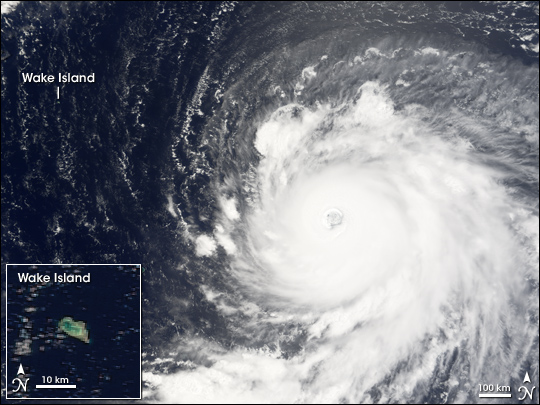 Super Typhoon Ioke started as all tropical cyclones do, as a depression—an area of low atmospheric pressure. After forming August 19, 2006, the depression quickly developed into a tropical storm, the threshold for earning a name. Ioke is the Hawaiian word for the name Joyce. Storms and hurricanes in the central Pacific are unusual, but they occur often enough for there to be a naming convention, applied by the Central Pacific Hurricane Center in Honolulu. The last named central Pacific storm was Huko in 2002. Ioke rose all the way to hurricane strength in less than 24 hours. Ioke also performed another unusual trick, crossing the International Date Line on August 27, which by convention meant the tropical cyclone was then called a typhoon instead of a hurricane.

Technically, Ioke became a super typhoon [typhoons with sustained winds over 240 kilometers per hour (150 miles per hour)] on August 24, but it retained the title of hurricane until it crossed into the typhoon region. With warm seas beneath it, little high-altitude wind shear to tear it apart, and no significant land in its way to disrupt it, the cyclone was expected (as of August 30) to continue to churn across the central Pacific at super typhoon strength for several days.

This photo-like image was acquired by the Moderate Resolution Imaging Spectroradiometer (MODIS) on NASA’s Terra satellite on August 29, 2006, at 11:30 a.m. local time (23:10 UTC August 28). Super Typhoon Ioke at the time of this image had a well-defined round shape, distinct spiral-arm structure, and an only slightly cloud-filled (or “partially closed”) eye. The University of Hawaii’s Tropical Storm Information Center reported that Super Typhoon Ioke had sustained winds of around 245 kilometers per hour (155 miles per hour) at the time this satellite image was acquired.

Super Typhoon Ioke may not be encountering any landmass capable of disrupting the Category 5 typhoon, but that does not mean there is no land in its way at all. Wake Island is a small atoll island with a small population serving a military and civilian base. All the residents were evacuated in recent days in anticipation of the arrival of Super Typhoon Ioke. As there are no tall land features on the island, it is quite possible that storm surge from the typhoon will send water cascading over the entire island, submerging it. Only the most sturdy structures were likely to survive the onslaught of storm surge, surf, and powerful winds, according to the Associated Press.