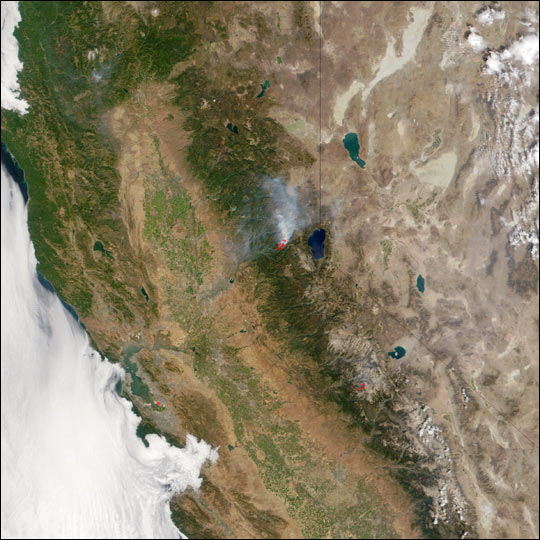 Flying on board NASA’s Terra satellite, the Moderate-resolution Imaging Spectroradiometer (MODIS) provides daily global coverage of wild fires such as these fires, indicated with red outlines, in California. MODIS detects such a wide range of electromagnetic energy that it can detect the heat from fires as well as make a true-color image of the area, as in this image made from data collected on Wednesday, August 29, 2001. The image takes in the forest-covered Coastal Mountain ranges as well as the Sierra Nevada range along the California-Nevada border. To the southeast, the mountains give way to Death Valley and the Mojave Desert at the lower right.

MODIS’s thermal detectors are so sensitive that they can locate fires even through a thick shroud of smoke, like that being emitted by the 9500-acre Star Fire, burning west of Lake Tahoe in the center of the image. The Star Fire, which is burning in the El Dorado and Tahoe National Forests, started on the morning of August 25, and has resulted in numerous road and area closures as well as public health advisories due to deteriorating air quality. According to U.S. Forest Service reports, the cause of the fire—still only about 12 percent contained—is under investigation.

Northwest across the Sacramento Valley, whose irrigated lands are bordered by a browner, more arid perimeter, about 1,000 residents of the town of Weaverville were forced to evacuate early on Wednesday, August 29, due to the 1,680-acre Oregon Fire, located in the upper left of the image. Residents were allowed to return that evening, but at least nine homes had been destroyed in the blaze, which is currently about 65 percent contained.

Southeast of the Star Fire, in Yosemite National Park, several lightning-caused fires totaling almost 7,000 acres and known as the Hoover Complex, are being allowed to burn in an effort to return wildland fire to its natural role in Yosemite, according to park reports from August 29.

In the last week of June 2008, California was the focal point of national fire activity. Over the first weekend of summer, record-breaking lightning activity in the state triggered hundreds of wildfires.