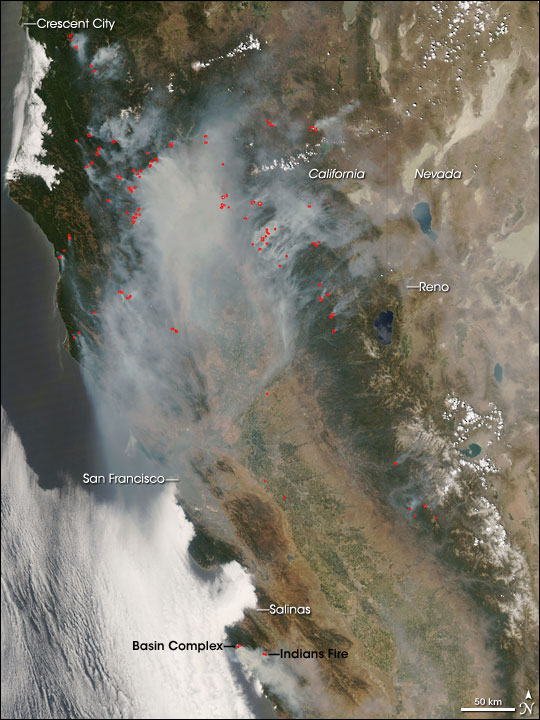 In the last week of June 2008, California was the focal point of national fire activity. Over the first weekend of summer, record-breaking lightning activity in the state triggered hundreds of wildfires. Vegetation was dry due to months of drought, and some of the fires spread rapidly. As of June 26, the National Interagency Fire Center reported that 34 uncontained large forest fires were burning in the state, affecting nearly 190,000 acres. (That total does not count fires that are being allowed to burn with minimal management to benefit the ecosystem.)

This natural-color image from the Moderate Resolution Imaging Spectroradiometer (MODIS) on NASA’s Aqua satellite shows the state on June 25, 2008. Places where MODIS detected actively burning fires are outlined in red. (It is likely that additional fires were burning but could not be detected because of the thick smoke.) Fire activity is concentrated in Northern California, and the Sacramento Valley is filled with gray smoke. However, the largest fire in the scene is the Indians Fire, which was burning south of Salinas. That blaze was nearly 60,000 acres as of June 26, and about 70 percent contained. Just to the northeast is the Basin Complex Fire, which was about 20,000 acres. In the previous 24 hours, it grew more than 7,000 acres, and it was only 3 percent contained.

Forecasters warned that hot weather and additional lightning storms were in the forecast for many areas during the upcoming weekend.

The high-resolution image provided above is at MODIS’ maximum spatial resolution (level of detail) of 250 meters per pixel. The MODIS Rapid Response Team provides the image in additional resolutions.

In the last week of June 2008, California was the focal point of national fire activity. Over the first weekend of summer, record-breaking lightning activity in the state triggered hundreds of wildfires.