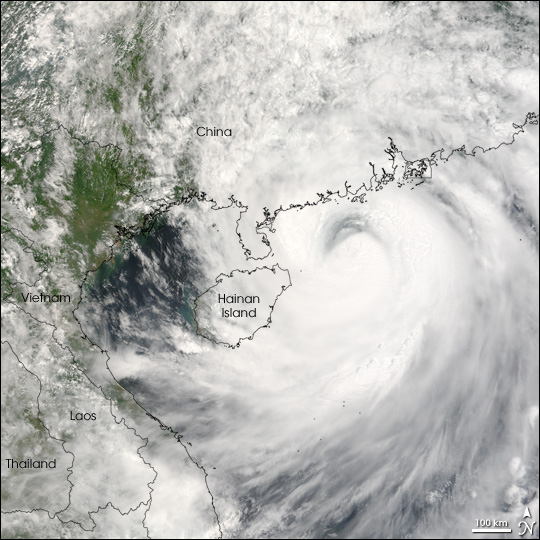 Typhoon Prapiroon formed in the western Pacific on July 31, 2006, off the coast of Luzon, the northernmost of the Philippine Islands. The tropical depression strengthened to storm status after crossing Luzon, and it reached typhoon status by early August 2, as it continued east-northeast across the South China Sea towards the Asian mainland. The storm system was blamed for some six deaths in the Philippines as it crossed the island. As of August 3, it was predicted to make landfall in southern China not far from Hainan Island, packing forecasted winds around 115 kilometers per hour (73 miles per hour). Fishing boats were ordered into port and rescue teams were being prepared for possible flooding and landslides.

The Moderate Resolution Imaging Spectroradiometer (MODIS) on NASA’s Terra satellite acquired this photo-like image of Typhoon Prapiroon on August 3, 2006, at 11:30 a.m. local time (03:30 UTC). Prapiroon had a very well-defined spiral shape and active thunderstorm systems (bright, puffy-looking clouds) close to the eyewall. At the time of this image, the storm had a closed eye: the center of the storm still had significant cloud cover. Open-eye structures are common in the most powerful of storms, and given that Prapiroon had a partially open eye the previous day, Typhoon Prapiroon would seem to be losing strength. The measured wind speeds, however, belie that assessment; the storm system’s peak sustained winds were estimated to be around 120 kilometers per hour (75 miles per hour) around the time the image was captured, according to the University of Hawaii’s Tropical Storm Information Center, which was similar to the wind speeds the day before.

Typhoon Prapiroon formed in the eastern Pacific on July 31, 2006, off the coast of Luzon, the northernmost of the Philippine Islands.