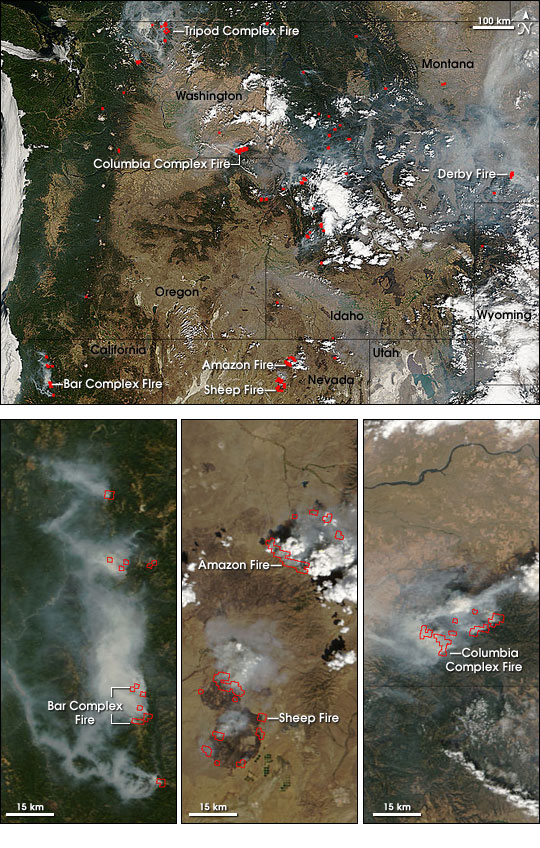 In early September 2006, firefighters in the western United States had their hands full. This image from the Moderate Resolution Imaging Spectroradiometer (MODIS) on NASA’s Terra satellite shows large wildfires (red dots) burning in Washington, Oregon, California, Idaho, Montana, and Nevada on September 5. Some clouds are scattered across the area, some of them likely building into afternoon thunderstorms, which may help or hinder firefighters, depending on how much rain, wind, or lightning the storms produce.

Several of the largest fires are labeled in the image, and three are shown in the close-up images below the wide-area image at top. The National Interagency Fire Center report from September 6 stated that the 32,019-acre Bar Complex Fire in California was threatening structures and a watershed; the 67,500-acre Amazon Fire and the 100,000-acre Sheep Fire were threatening structures, livestock, fisheries, power lines, mines, and grazing lands; and the 92,225-acre Columbia Complex Fire was threatening residences, a ski area, a wind energy site, and commercial resources.

The high-resolution image provided above has a spatial resolution of 250 meters per pixel. The MODIS Rapid Response System provides daily images of sub-sections of the entire United States at additional resolutions via a clickable map.