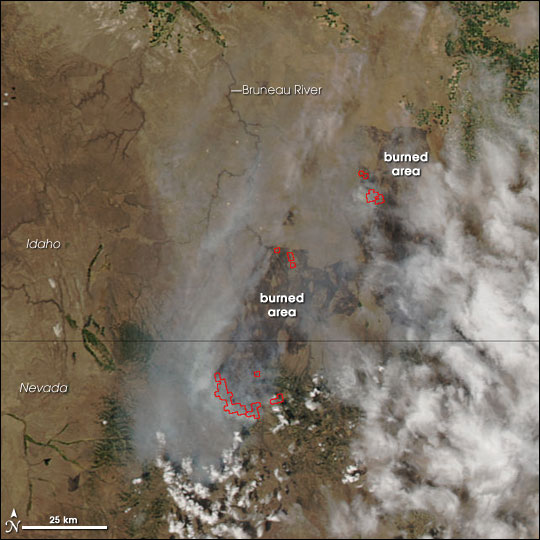 When two large, previously separate wildfires (Rowland and Elk Mountain) near the Idaho-Nevada state line merged over the July 21 weekend, fire management officials renamed the incident as the Murphy Complex Fire. According to the morning report from the National Interagency Fire Center on July 23, 2007, the blaze had consumed more than 560,000 acres and was 15 percent contained. This image of the Murphy Complex Fire was captured by the Moderate Resolution Imaging Spectroradiometer (MODIS) on NASA’s Aqua satellite on July 22. Places where the sensor detected actively burning fire are outlined in red. The dry grassland and sagebrush terrain appears olive-tan, while the sprawling burned area appears deep brown.

The large image provided above has a spatial resolution (level of detail) of 250 meters per pixel. The MODIS Rapid Response Team provides twice-daily images of the western United States in additional resolutions. Images of the separate fires were previously published in the Fires in Idaho and Eastern Oregon event.