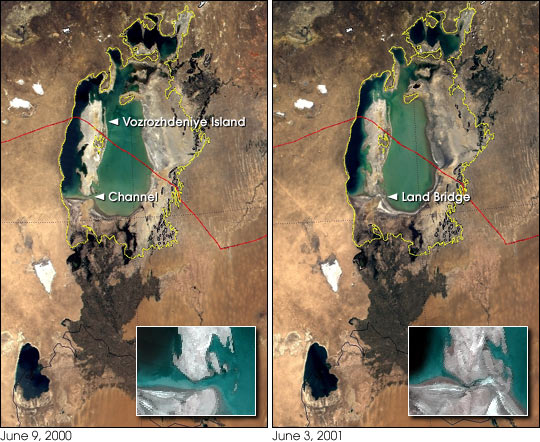 The images above, collected by the Moderate-resolution Imaging Spectroradiometer (MODIS) flying aboard NASA's Terra satellite, show how the Aral Sea has changed over the last year (from June 9, 2000, to June 3, 2001). The yellow line superimposed on the scenes reveals the full extent of the Aral Sea in 1970, while the red line represents the border between Kazakhstan and Uzbekistan. The Aral (which is actually a lake) is drying rapidly because the two main rivers that fed it--the Amu Darya and the Syr Darya--had most of their water diverted in order to transform a desert area into cotton and rice plantations.

Vozrozhdeniye means "renaissance" or "rebirth." The more detailed MODIS images (insets) show that the small water channel that separated the island from the mainland in the summer of 2000 had vanished by the summer 2001. This means that animals living on the island now have easy access to the mainland, and vice versa.

The images above, collected by the Moderate-resolution Imaging Spectroradiometer (MODIS) flying aboard NASA's Terra satellite, show how the Aral Sea has changed over the last year (from June 9, 2000, to June 3, 2001).

Fires Near the Aral Sea