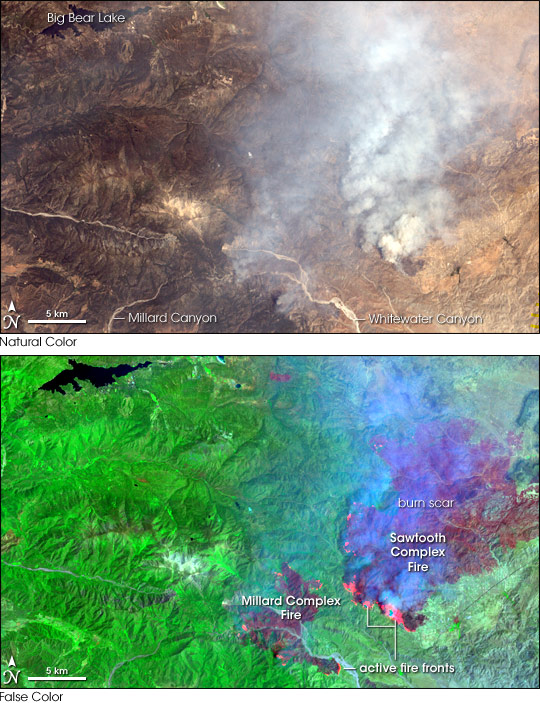 According to news reports, the Sawtooth and Millard Complex Fires in southern California east of San Bernardino merged on Friday afternoon, July 14, 2006. This pair of images of the two fires was captured on July 14 before the two fires joined. The top image is a photo-like, natural-color satellite image captured by the Enhanced Thematic Mapper Plus sensor on NASA’s Landsat satellite. The dull vegetation of this semi-arid region at the western edge of the Mojave Desert appears brownish, while canyons and bare spots appear tan. The false-color image below includes satellite observations of shortwave and near-infrared light reflected from the ground. In this view, vegetation appears bright green, burned areas appear deep red, and actively flaming fire fronts appear hot pink. Smoke appears blue.

These fires were burning in an area with large expanses of dead trees that were killed by pine bark beetles. As of July 19, 2006, the Sawtooth Complex Fire was 61,700 acres and fully contained, while the Millard Complex Fire was about 24,210 acres and 57 percent contained. According to reports from the National Interagency Fire Center, 221 structures were lost in the Sawtooth Fire.

Several large fires were burning in California in mid-July 2006. This event contains images of the Sawtooth, Millard, and Canyon Fires.