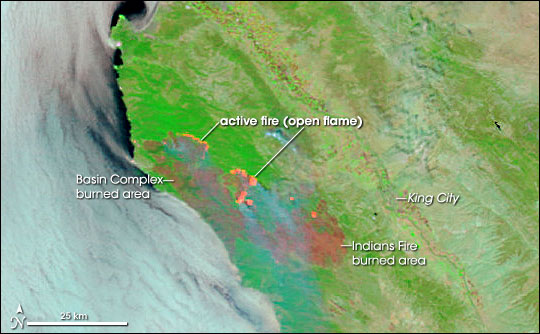 The Indians Fire and the Basin Complex Fire in the Los Padres National Forest burned together in the second week of July. Their combined acreage was more than 180,000 acres. Of the two fires, the Basin Complex was the more active, with multiple advancing fronts. According to reports from the National Interagency Fire Center on July 11, the Basin Fire was spreading by isolated and group tree torching and short crown runs (fire spreading through the tops of trees).

This image of the combined fires was captured by the Moderate Resolution Imaging Spectroradiometer (MODIS) on NASA’s Terra satellite on July 10, 2008. It is a false-color image, made from visible and infrared light. The burned areas appear reddish brown, while unburned vegetation is bright green. Smoke is transparent blue, while clouds over the Pacific are bluish white. The extremely bright areas indicate actively burning fire fronts; in this type of image, such a bright signature often indicates open flame.