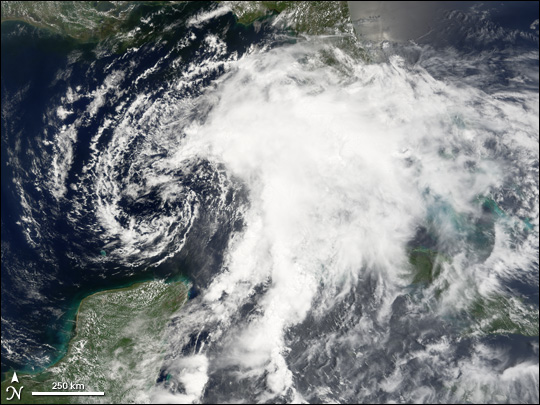 This photo-like image was acquired by the Moderate Resolution Imaging Spectroradiometer (MODIS) on the Terra satellite on June 11 2006, at 12:20 p.m. local time (16:20 UTC). The tropical storm did have a wispy spiral structure, centered north of the Yucatan Peninsula in this satellite image, but there was little other evidence of a well-developed storm. To the east of the storm center, a large bank of clouds sprawled over the eastern Gulf of Mexico and southern Florida.

Sustained winds in the storm system were estimated to be around 70 kilometers per hour (45 miles per hour) around the time the image was captured, according to the University of Hawaii’s Tropical Storm Information Center. However, the less-than-hurricane-strength winds did not mean that Alberto posed no significant hazards. Rainfall totals from the storm were predicted to be between 12 to 25 centimeters (5 to 10 inches), and the storm center was also expected to spawn tornadoes once Alberto crossed land. Drought-stricken Florida was looking for rain, but the heavy downpours predicted were also causing concerns about local flooding.