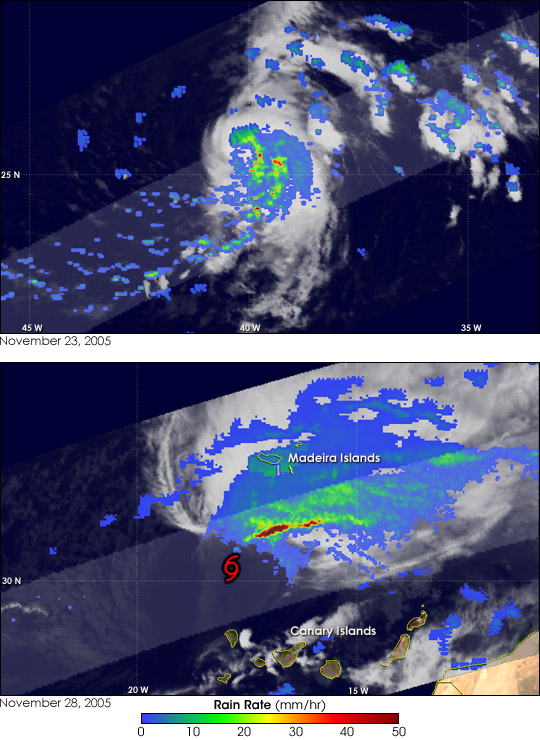 Tropical Storm Delta, the 25th named storm of the 2005 hurricane season, started out as a non-tropical area of low pressure about 1,150 miles southwest of the Azores in the eastern Atlantic. By November 23, 2005, the system had developed into Tropical Storm Delta.

The Tropical Rainfall Measuring Mission (TRMM) satellite has continued to monitor the extraordinary activity in the Atlantic. Armed with an array of sensors, TRMM provides unique images and information on tropical cyclones over the global Tropics. The top image of Delta was taken by TRMM at 4:32 pm EDT on November 23, and shows the rain intensity within the storm. TRMM reveals that Delta is rather small, but the circulation is fairly well developed as evidenced by the nearly closed eye (semicircular green area) and the curvature of the rain field. At the time of the image, Delta was a tropical storm with sustained winds estimated at 93 kilometers per hour (58 mph) by the National Hurricane Center (NHC).

Initially the storm headed south before veering off to the northeast. As the system was approaching the Canary Islands off the coast of Africa, it began to merge with another weather system and became more extratropical in nature. TRMM took the lower image at 1:38 pm EDT on the November 28, just as Delta was passing north of the Canary Islands. The storm center (shown by the red symbol) was completely exposed, and all of the rain was ahead (northeast) of the center. A large band of heavy (dark red) to moderate (green) rain shows where Delta’s circulation was interacting with the front.