A Spaceborne Perspective on the Red, White, and Blue 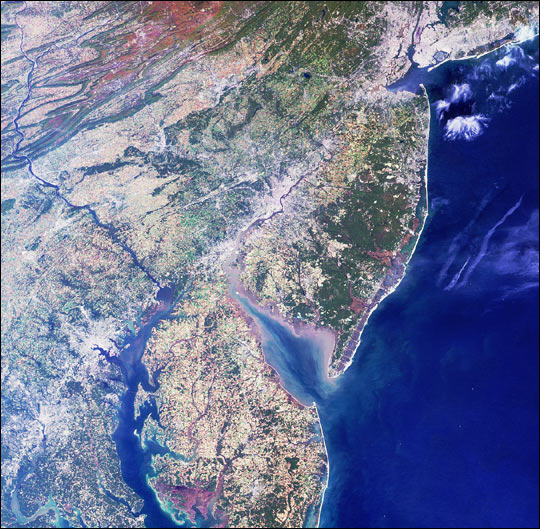 Philadelphia, where the Declaration of Independence was signed 225 years ago on July 4, 1776, lies in the center of this image from NASA's Multi-angle Imaging SpectroRadiometer (MISR). This true-color view of the northeastern United States, taken from the instrument's nadir, or downward-looking, camera includes a fitting display of the reddish colors of soils, grayish-whites of urban areas and clouds, and blue hues of water.

Larger cities, including New York, Newark, Philadelphia, Wilmington, Baltimore and Washington D.C., are visible from upper right to lower left. The bright sands of the New Jersey shoreline and a pattern of highly reflective roads and bridges extend northward along the coast from Delaware Bay. A popular tourist destination for those wanting to avoid the crowds and main roads is the Coastal Heritage Trail, a 440-kilometer collection of historic and other points of interest developed by the National Park Service and the state of New Jersey.

A portion of Pennsylvania's Appalachian Mountains are captured in the upper left corner. The effects of folding and erosion on these ancient, mostly sedimentary deposits are visible, and the reddish colors indicate ironstone and iron-rich sandstone. The southeast-flowing Susquehanna River cuts transversely across these folded formations toward the Chesapeake Bay in Havre de Grace, Maryland, where it provides 50 percent of all the freshwater entering the great estuary. The waters of the Susquehanna originate at Otsego Lake in New York and meander along 700 kilometers until reaching Chesapeake Bay and the sea.