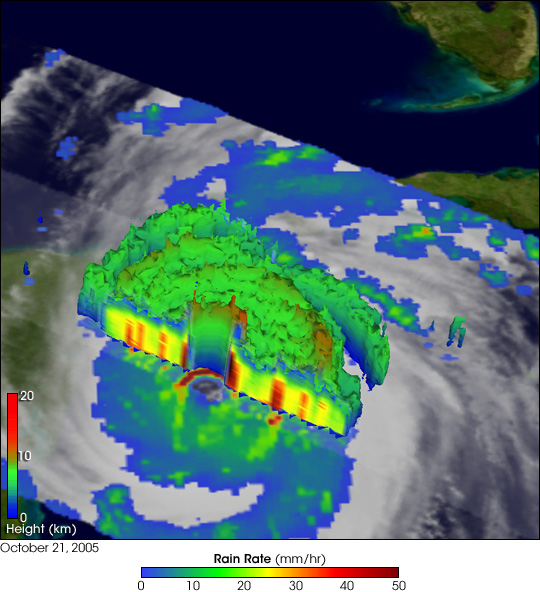 When Wilma became a named tropical storm on October 17, 2005, it tied a record dating back to 1933 for the most named storms in a season. When Wilma became a hurricane on October 18, it tied the record dating back to 1969 for the most hurricanes in a season. However, when Wilma shot from a tropical storm to a Category 5 hurricane on the morning of October 19, it broke the all-time record for the lowest pressure ever measured in the Atlantic Basin. A hurricane’s central pressure is an indicator of its intensity—the lower the pressure, the more intense the storm.

The Tropical Rainfall Measuring Mission (TRMM) satellite observed Wilma approaching the Yucatan Peninsula at 00:55 UTC on October 21, 2005 (8:55 pm EDT October 20, 2005). This 3-D perspective of Wilma shows a cut-away view of the eye, with cloud height on the top right side of the storm and rain rates in the lower left side of the storm. TRMM measures the cloud height with radar, which detects the location of precipitation (and therefore clouds). In this image, clouds tower over 10 kilometers above the ocean around the eye. The deep ring of red at the base of the eye shows that heavy rain is falling in the same area.

TRMM reveals that Wilma had a well-defined, closed inner eye of intense rain surrounded by larger concentric rings of more moderate rain. (The concentric rings are easier to see in the version of the image that does not include the 3-D cloud height overlay, available here.) The sharply curved features in the rain field surrounding the inner eye are the mark of well-developed, intense circulation. At the time of the image, Wilma was a Category 4 storm with maximum sustained winds reported at 240 kilometers per hour (150 miles per hour) by the National Hurricane Center. At its height, Wilma had sustained winds of 280 km/hr (175 mph).

At the time these images were taken, Wilma was drifting very slowly to the northwest towards Cozumel, Mexico. The storm was expected to enter the Gulf of Mexico as a weaker hurricane before making landfall along the west coast of Florida.

The TRMM satellite is one of many satellites monitoring hurricanes and typhoons. Launched in November of 1997 to measure rainfall over the Tropics, TRMM has a number of instruments that are valuable for observing tropical cyclones. In these images, rain rates in the central portion of the swath are from the TRMM Precipitation Radar (PR). Rain rates in the outer swath are from the TRMM Microwave Imager (TMI). The rain rates are overlaid on infrared (IR) data from the TRMM Visible Infrared Scanner (VIRS).