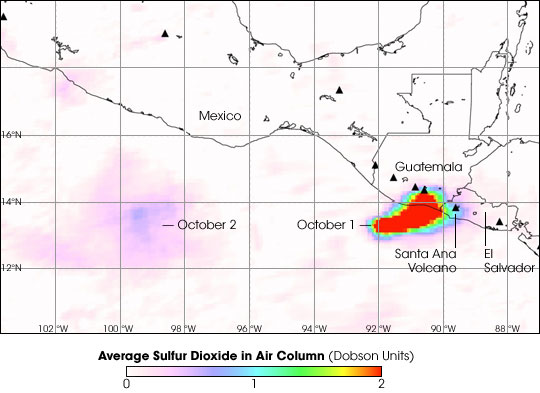 On October 1, 2005, El Salvador’s Santa Ana, or Ilamatepec, Volcano erupted for the first time since 1904. Besides ash, lava, rocks as big as cars, and a boiling flood of muddy water, Santa Ana’s eruption produced something else: sulfur dioxide. This invisible gas can inflame mucous membranes of the eyes, skin, and upper respiratory tract. It also leads to acid rain and volcanic smog (vog) that interferes with air transport.

The Ozone Monitoring Instrument (OMI) on NASA’s Aura satellite collects data on atmospheric chemistry, including sulfur dioxide emissions from volcanoes. This image combines OMI’s observations of the Santa Ana Volcano taken on October 1 and 2, 2005. In this image of Central America, black triangles indicate volcanoes. Sulfur dioxide concentrations are color coded, with highest concentrations in red, and lowest concentrations in pale pink. Near the Santa Ana Volcano hovers a thick cloud of sulfur dioxide; this is the emission cloud as it appeared on October 1. To the left is a dispersed cloud; this is how the same cloud appeared on October 2 as the gas drifted westward over the Pacific, having lost half of its sulfur dioxide mass. The total cloud mass on October 1 was estimated at 10,000 tons, a relatively small eruption. Recent examples of much larger eruptions include Manam on January 27-28, 2005, and Anatahan on April 5-6, 2005.

On October 1, 2005, the Santa Ana (also known as the Ilamatepec) Volcano erupted, producing car-sized lava rocks, a boiling flood of mud and water, and a cloud of sulfur dioxide.