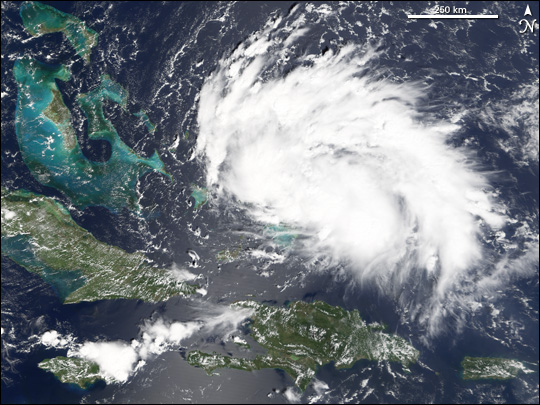 A tropical depression formed in the Bahamas on September 17, 2005. Once it was organized enough to have winds of over 62 kilometers per hour (39 miles per hour), it was classified as a tropical storm and given the name Rita, becoming the 17th named storm system of the 2005 hurricane season. With the season not yet over, 2005 is already the 5th most active storm season since naming records were started in 1851. According to the National Hurricane Center, 21 tropical storms formed in 1933, 19 developed in 1995 and 1887, and 18 formed in 1969. Rita is also the earliest “R” named storm in a season.

Rita crossed the threshold to tropical storm status around 5:00 p.m. (local time) on September 18, 2005. The Moderate Resolution Imaging Spectroradiometer (MODIS) on NASA’s Terra satellite captured this image of Rita roughly fives hours earlier at 11:40 a.m. while the storm was still an organizing tropical depression. The classical spiral structure of a hurricane is not yet fully formed, nor is there a well-organized eye of the storm, but these nascent features of the developing system are apparent already.

Forecasters are particularly concerned about Rita as it is projected to pass through the Florida Key Islands as it reaches hurricane strength. The storm track projections as of September 19 have it crossing the Gulf of Mexico to make landfall in the general vicinity of southern Texas, but forecasting hurricanes several days in advance is still an uncertain science and there are fears that Rita could turn in the Gulf and head into areas recently battered by Katrina.