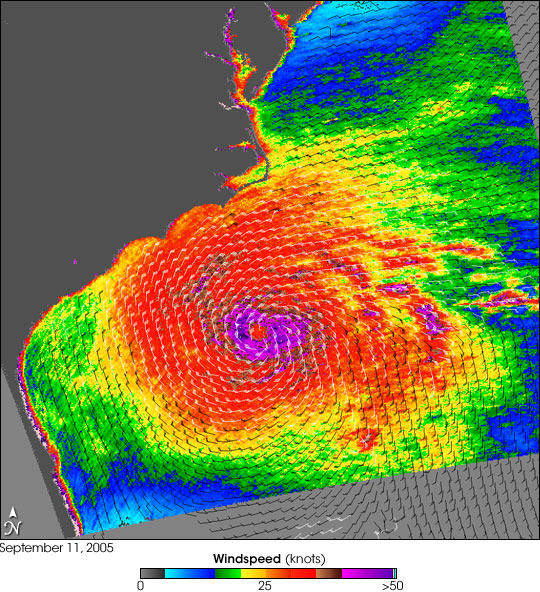 NASA’s QuikSCAT satellite captured this image of Hurricane Ophelia on September 11, 2005, at 5:47 a.m. local time. At this time, the hurricane had sustained winds of 130 kilometers per hour (80 miles per hour; 70 knots).

Ophelia has been an intriguing storm. It formed off the Florida coast (an unusual formation point for a tropical storm), gradually built power to hurricane status over the course of a few days, and then wound down in strength. After spending several days in roughly one location, Ophelia moved farther offshore, roughly parallel to the U.S. East Coast, and re-gathered strength to become the Category 1 hurricane by the time this image was taken. Forecast tracks for the storm are uncertain, but one conceivable storm track would take it ashore still at hurricane strength along the North Carolina Outer Banks shoreline.

Measurements of the wind strength of Hurricane Ophelia show sustained winds stronger than those shown by QuikSCAT observations. This is because the power of the storm makes accurate measurements difficult. The scatterometer sends pulses of microwave energy through the atmosphere to the ocean surface, and measures the energy that bounces back from the wind-roughened surface. The energy of the microwave pulses changes depending on wind speed and direction, giving scientists a way to monitor wind around the world.