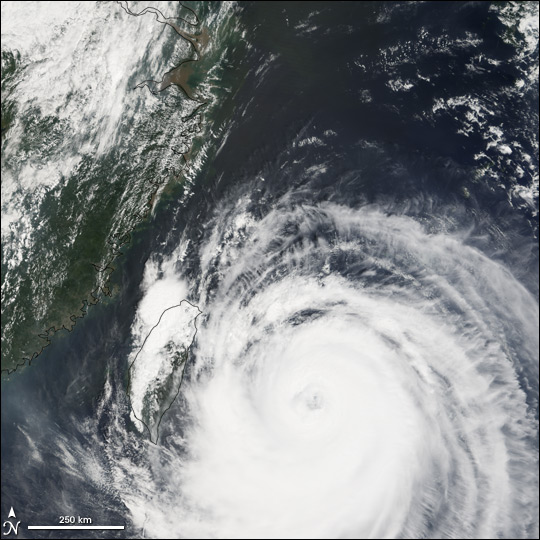 Typhoon Talim was a powerful super typhoon in the western Pacific when the Moderate Resolution Imaging Spectroradiometer (MODIS) on NASA’s Terra satellite captured this image on August 31, 2005 at 11:20 a.m. Tokyo time. It had sustained winds of around 200 kilometers an hour (120 miles per hour) and was heading towards Taiwan at around 15 miles per hour. This is somewhat weaker than it was just a day before.

The outer edge of the storm is starting to rain onto Taiwan in this image, and the full storm should make landfall in the next day. The typhoon will continue to weaken as it travels over the island, then continue across the Taiwan Strait to make landfall again on mainland China. It is the 13th named storm of the Pacific typhoon season, which has seen a record number of storms, and in particular, super typhoons.

Typhoon Talim was building strength in the western Pacific Ocean in late August as it bore down on Taiwan and mainland China.