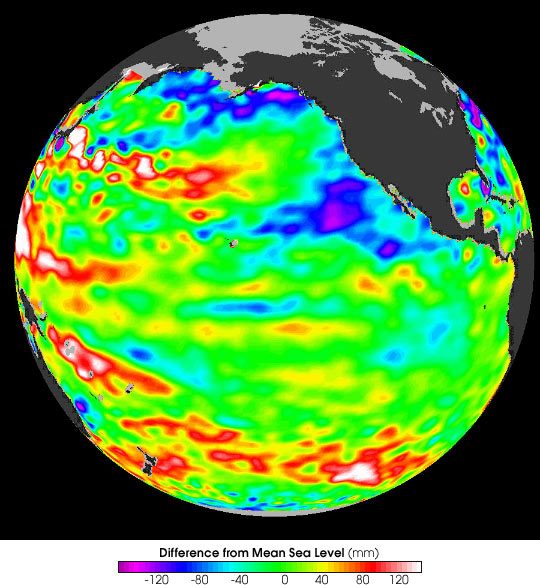 Pacific Decadal Oscillation While change may be on the way, the Pacific is still dominated by the strong, larger-than- El Niño/La Niña pattern called the Pacific Decadal Oscillation (PDO), according to the latest data from the U.S.-French TOPEX/Poseidon satellite mission, managed by NASA's Jet Propulsion Laboratory, Pasadena, Calif. The PDO is a long-term ocean temperature fluctuation of the Pacific Ocean that waxes and wanes approximately every 10 to 20 years. "This continuing PDO pattern of the past three years signals more of the unusually dry conditions that have afflicted the North American west coast," said JPL oceanographer Dr. William Patzert.

The new satellite image also shows a pulse of warm water traveling toward South America, a reminder that another El Niño is due in the next year or so. El Niños generally return every two to seven years; the last one occurred in 1997. This equatorial, eastward-traveling Kelvin wave (a bulge of warm water) is headed toward South America at about 140 degrees West longitude. In late July, when this wave arrives at the west coast of South America, there should be a modest warming of the eastern Pacific. Kelvin waves, often seen before an El Niño develops, are triggered by westerly wind bursts (i.e., winds blowing in the opposite direction from the normal easterly trade winds) in the western Pacific. Also, the strength of El Niño's next appearance could depend on how much the PDO dominates ocean circulation and temperature patterns over the next few years.

Image courtesy NASA JPL, based on data from TOPEX/Poseidon