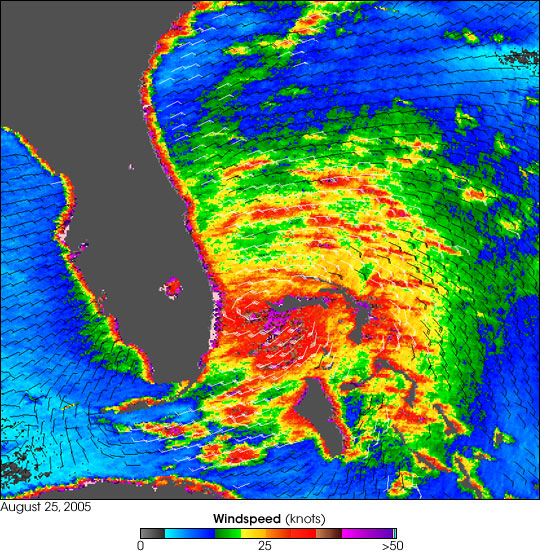 Tropical Storm Katrina is shown here as observed by NASA’s QuikSCAT satellite on August 25, 2005, at 08:37 UTC (4:37 a.m. in Florida). At this time, the storm had 80-kilometer-per-hour (50 miles per hour; 43 knots) sustained winds. The storm does not appear to yet have reached hurricane strength.

The greater danger may be not with her winds, but with Katrina’s rains. The storm is moving slowly, just 13 km/hr (8 mph), and is expected to slow as it moves over land. This means that Katrina’s heavy rains will linger longer over one area, dumping 15-25 centimeters (6-10 inches) of rain over Florida and the Bahamas and possibly up to 38 cm (15 inches) in some regions, the National Hurricane Center warns.

Measurements of the wind strength of Tropical Storm Katrina show sustained winds similar to those shown by these QuikSCAT observations, though not identical. This is because the power of the storm makes accurate measurements difficult. The scatterometer sends pulses of microwave energy through the atmosphere to the ocean surface, and measures the energy that bounces back from the wind-roughened surface. The energy of the microwave pulses changes depending on wind speed and direction, giving scientists a way to monitor wind around the world.

Tropical cyclones (the generic term for hurricanes and typhoons) and to a lesser extent, weaker storm systems like Katrina, are difficult to measure. To relate the radar energy return to actual wind speed, scientists compare measurements taken from buoys and other ground stations to data the satellite acquired at the same time and place. Because the high wind speeds generated by cyclones are rare, scientists do not have corresponding ground information to know how to translate data from the satellite for wind speeds above 50 knots (about 93 km/hr or 58 mph). Also, the unusually heavy rain found in a cyclone distorts the microwave pulses in a number of ways, making a conversion to accurate wind speed difficult. Instead, the scatterometer provides a nice picture of the relative wind speeds within the storm and shows wind direction.

For more information about the storm, please visit the National Hurricane Center.