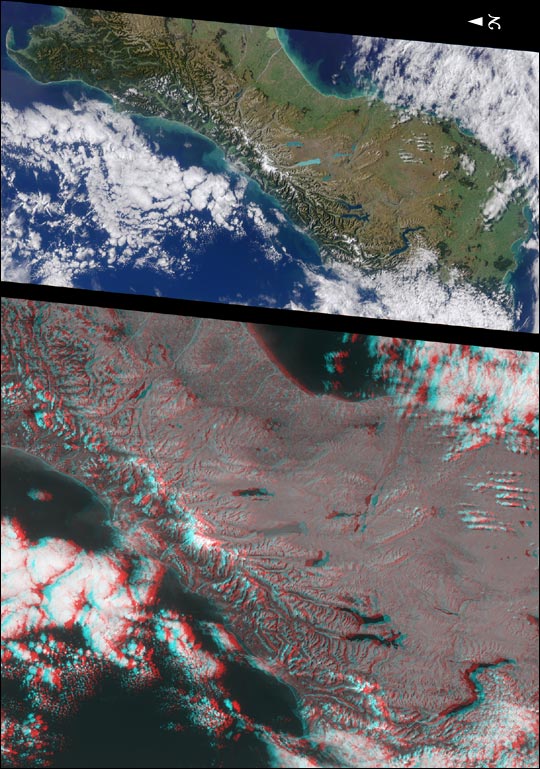 The rugged Southern Alps extend some 650 kilometers (400 miles) along the western side of New Zealand's South Island. The mountains are often obscured by clouds, which is probably why the Maoris called New Zealand "Aotearoa", the long white cloud. The higher peaks are snow-covered all year round. Westerly winds bring clouds that drop over 500 centimeters (195 inches) of rain annually on luxuriant rain forest along the west coast. The drier eastern seaboard is home to the majority of the island's population.

This pair of Multi-angle Imaging Spectroradiometer (MISR) images is from April 13, 2000. The upper image is a natural color view from the instrument's vertical-viewing (nadir) camera. It is presented at a resolution of 550 meters (1800 feet) per pixel. The lower image is a stereo anaglyph generated from the instrument's 46-degree and 26-degree forward-viewing cameras, and is presented at 275-meter (900 feet) per pixel resolution to show the portion of the image containing the Southern Alps in greater detail. Viewing the anaglyph in 3-D requires the use of red/blue glasses with the red filter over your left eye. To facilitate stereoscopic viewing, both images have been oriented with north at the left.

The tallest mountain in the Southern Alps is Mt. Cook, at an elevation of 3754 meters (12287 feet). Its snow-covered peak is visible to the left of center in each of these MISR images. From the high peaks, glaciers have gouged long, slender mountain lakes and coastal fiords. Immediately to the southeast of Mt. Cook (to the right in these images), the glacial pale-blue water of Lake Pukaki stands out. Further to the south in adjacent valleys you can easily see Lakes Hawea and Wanaka, between which (though not visible here) is the Haast Pass Road, the most southerly of the few links between the east and west coast road systems. Further to the south is the prominent "S" shape of Lake Wakatipu, 83 kilometers (52 miles) long, on the northern shore of which is Queenstown, the principal resort town of the island. The remote and spectacular Fiordland National Park, which occupies the far southwest of the island, is largely under cloud.

Prominent along the east coast are the Canterbury Plains, approximately 180 kilometers (110 miles) long and extending inland from the coast to the foothills of the Southern Alps. This is the largest area of flat land in New Zealand, and a rich agricultural region renowned for its wheat, wool, and livestock. Here the distance between the east and west coasts is little more than 150 kilometers (90 miles).

A powerful winter storm swept across New Zealand on June 12, 2006.