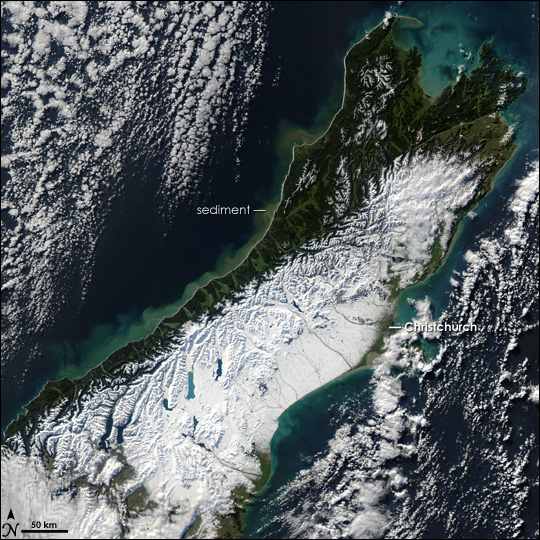 A powerful winter storm swept across New Zealand on June 12, 2006. The storm brought strong winds that gusted up to 130 kilometers per hour (80 miles per hour) and at least one tornado, reported the Australian Broadcasting Corporation (ABC). Heavy rains triggered floods and landslides along the western coast of South Island, and snow blanketed the central part of the island. This wild weather, said the ABC, knocked out power in Auckland, on North Island (not pictured), and throughout the Canterbury region, shown here.

On June 13, skies were clear when the Moderate Resolution Imaging Spectroradiometer (MODIS) on NASA’s Aqua satellite captured this photo-like image of South Island, New Zealand. Snow covers the Southern Alps, making the finger-like glacier lakes stand out like sapphires against a field of white. The snow stretches to the sea on the east side of the island. It is here, in the river basins and valleys east of the mountains and around Christchurch, that deep snow closed roads and isolated communities, say news reports.

The impact of heavy rain along the western shore of South Island is also evident in this image. Mud-laden water, full of sediment from landslides and run-off, flows into the Tasman Sea from the many streams that run out of the mountains. In the ocean, the muddy water is tan and fades to a cloudy green as the sediment disperses.

The large image provided above has a resolution of 250 meters per pixel. It is available in additional resolutions from the MODIS Rapid Response Team.

A powerful winter storm swept across New Zealand on June 12, 2006.