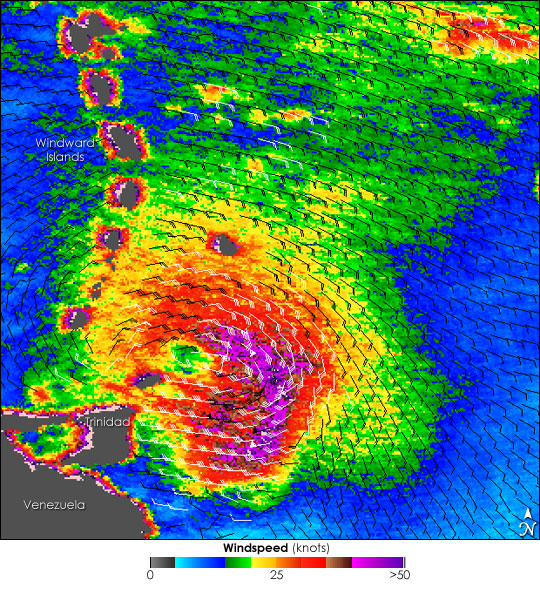 When NASA’s Quick Scatterometer (QuickScat) captured this image on July 13, 2005, Emily was just a few hours away from becoming a hurricane. The tropical storm was approaching Trinidad with winds of 95 kilometers per hour (60 miles per hour or 50 knots) when this image was taken at 5:05 p.m. Eastern Daylight Savings Time (21:05 UTC). The image reveals the structure of the storm, with wind speed shown in color and direction indicated by barbs. The white barbs indicate regions of heavy rain. Both the heaviest downpours and the strongest winds, shown in purple, are just east of the center of the storm. Compared to an image taken in the morning of July 13, this powerful section of the storm has expanded and moved closer to the center as Emily developed through the day.

Emily is the fifth tropical storm of the 2005 Atlantic hurricane season, and the second storm to reach hurricane status. By July 15, Emily reached Category 3 status on the Saffir-Simpson scale with winds of 205 km/hr (125 mph).